CHARLOTTESVILLE — He felt the nerves before his first start for the University of Virginia football team, Perris Jones acknowledged later, even if it wasn’t apparent to those watching the game at Scott Stadium last weekend.

If Jones was nervous Tuesday night, he once again hid it well. On the “Coach’s Corner with Tony Elliott,” Jones joined play-by-play announcer John Freeman and Elliott, the Cavaliers’ first-year head coach, for the final segment of the weekly show and wowed the audience at BJ’s Restaurant & Brewhouse.

In his appearance, which lasted about 20 minutes, the graduate student from Northern Virginia discussed his improbable ascent to the top of the depth chart at tailback, his academic résumé and his literary ambitions. Jones also read one of his poems, titled “The Tune.”

Afterward, once the audience’s applauded had died down, Jones explained the genesis of the poem.

“A lot of my personal experiences fuel my poetry,” he said. “As a kid, I used to have horrible nightmares, so I couldn’t watch anything that was remotely scary, because I would be up all night. And so I would always wake up swearing that something was coming to get me or something like that. And my mom and my grandmother would come in and just reassure me, ‘It’s OK, honey, it’s not real, you’re creating this reality. Just wake up and realize that you’re okay.’ And that’s kind of what this kid in the poem went through: He’s afraid of something that really doesn’t exist. He created it. So once you wake up and realize that you created, essentially, your biggest fears, you’re able to deal with them better.”

A former walk-on who rushed for 104 yds and scored 2 TDs on Saturday, earned two degrees in four years, is a published author and recited an original poem on his Coach's radio show this week. SCHOLAR-athlete. pic.twitter.com/wSdwE93mwD

Before coming to Charlottesville in December, Elliott knew little about Jones, who’d joined the Wahoos’ program as a walk-on in 2018 and had three career carries before last weekend. The more he’s around Jones, the more impressed Elliott grows.

“What you’re witnessing,” Elliott said Tuesday night, “is that he’s striving for excellence in all areas of his life, and football is just a vehicle that’s going to carry him on this part of his journey. Eventually he’s going to have to change vehicles and move forward, and one of the biggest challenges for football players is to get out of the football car and then to get into another car so that you can continue on the rest of your journey in life. But this is what I’m after: helping young men realize their potential and not being afraid of all of the other talents that they have beyond the football field.”

Jones, who’s listed at 5-foot-8, 180 pounds, won the starting tailback’s job during training camp last month. That thrust him into an unfamiliar situation when Virginia opened the season against Richmond last weekend, but he met the moment. Jones rushed for 104 yards and one touchdown on 19 carries and caught a TD pass from quarterback Brennan Armstrong.

Until Saturday, Jones hadn’t scored as a Cavalier, but late in the first quarter he crossed the goal line on a 15-yard run.

“Honestly, I was shocked,” Jones said. “I’d never been in that position before, so it didn’t really hit me until I got to the bench. And then I was like, ‘Wow, I just scored my first collegiate touchdown.’ ”

“Those guys really believing in me and affirming me when they were here was definitely a big deal,” Jones said.

He’s living this year with two other tailbacks, Mike Hollins and Ronnie Walker Jr. “We’re a tight bunch,” Jones said. “Those are my brothers.” 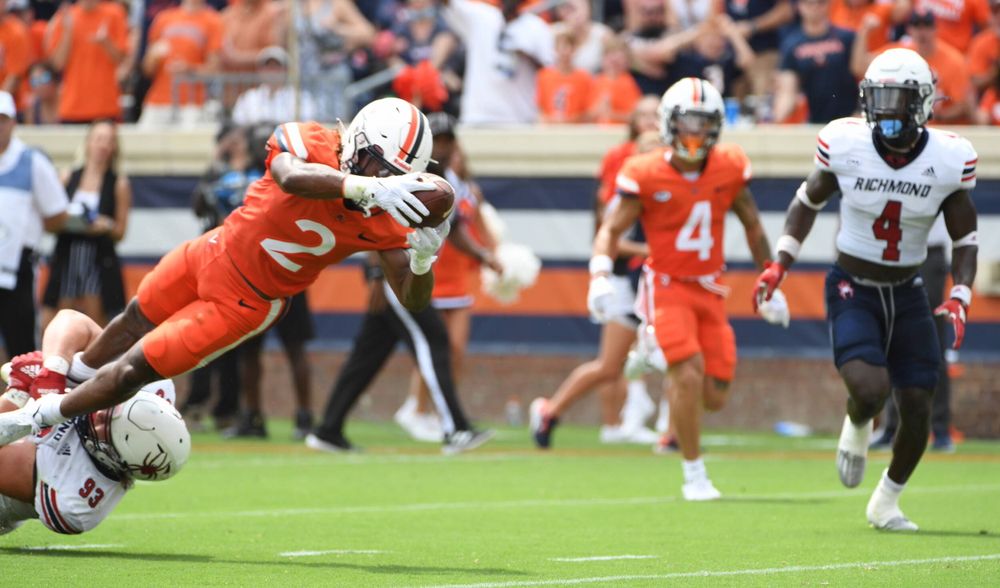 Virginia is headed to Champaign, Ill., this weekend. In a non-conference game to air on ESPN, UVA (1-0) meets Illinois (1-1) at Memorial Stadium on Saturday at 4 p.m. Eastern.

“We want to make sure that there’s no falloff and no slack,” Jones said, “and that we uphold the standard of performance no matter where we play.”

Jones, whose father was in the military, was born in Arcadia, Fla. His family moved to Olympia, Wash., when Jones was 8 years old and then settled in Northern Virginia before he began high school.

He spent two years at Bishop Ireton before transferring to another private school in Alexandria, Episcopal High. His size scared off most FBS recruiters, but Nick Howell, then the Cavaliers’ defensive coordinator, encouraged Jones to apply to UVA and, if accepted, join the team as a walk-on.

“It’s rewarding,” Jones said, “because it feels like you really earned every penny. Not saying the guys that [came to UVA] on scholarship didn’t, but showing up and really earning it and standing out and being noticed and rewarded for that is definitely a privilege.”

Jones’ journey is one with which Elliott, a former wide receiver at Clemson, is familiar. He joined the Tigers’ program as a walk-on and eventually earned a scholarship.

Jones has applied himself on and off the football field at Virginia. He holds two bachelor’s degrees—one in African-American & African Studies and the other in English—and has started a master’s program in the School of Education and Human Development.

When Jones was exploring undergraduate majors, his academic advisor encouraged him to follow his passions. “And so I took a couple classes and I fell in love with writing, fell in love with reading,” Jones said. “I just loved the world that writing and literature can take you to. It’s kind of like an escape.”

As a first-year student at UVA, Jones wrote a short piece fiction titled “Will It End?” Its protagonist is an African-American mother who learns the police have shot and killed her son after mistaking him for a suspect. The story was included in a book published in 2020: Equality and Justice: An Engaged Generation, a Troubled World.

Jones hopes to have a book of his poems published one day. “I kind of use life as my fuel for poetry,” he said. “So whenever I think about something, I start jotting down notes on my phone and then I carry it to my laptop and then save it in the file and just keep adding and adding.” 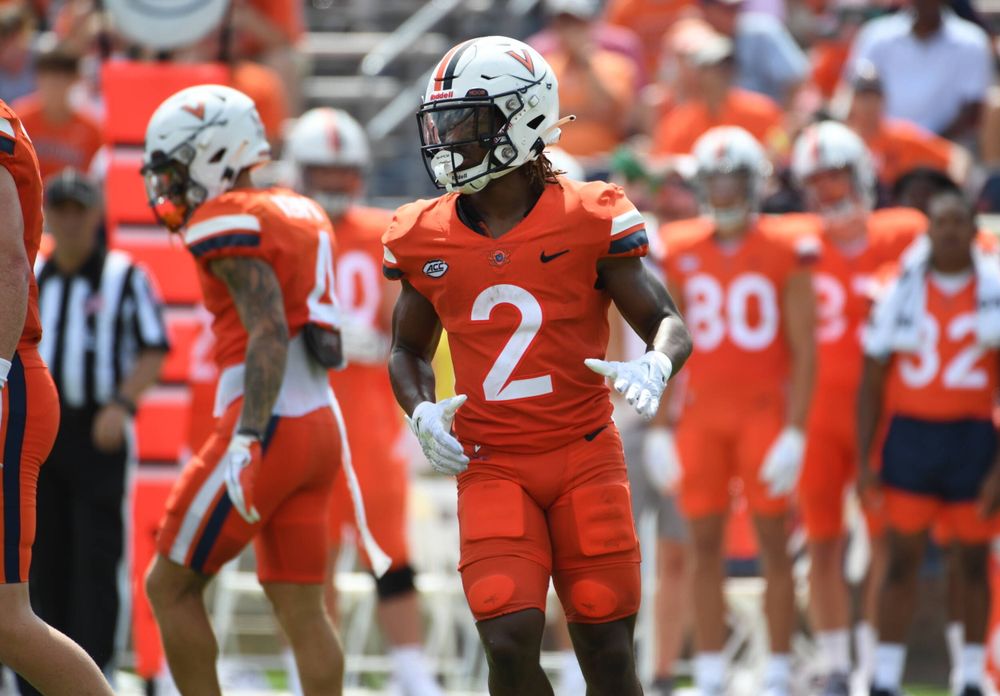 His role in the football program has grown over the years. Jones played in four games as a true freshman in 2018. He appeared in 10 games in each of the next three seasons and earned playing time as a kick-returner.

Even so, coming into this year Jones wasn’t seen, at least outside the program, as a leading candidate in the battle for the tailback’s job. But the coaching staff played no favorites, and Jones seized the opportunity.

Week two Walkthrough! This week, @IAmBallHawk is joined by @p__m__j!

He didn’t separate himself during spring practice, but Jones’ work in the summer strength and conditioning program and in training camp earned him the start against Richmond.

Jones impressed the coaching staff with “his dependability, availability, accountability,” Elliott said. “Then he’s got a lot of physical ability, too. He’s very talented.”

Elliott said he saw Jones “working to be complete, even though he comes in a little bit smaller package than some of the other guys. You can see the size of his heart by the way that he worked, and he’s a complete team player. Even though he had aspirations of being the starter, it was never to say that he was a starter; he just wanted to help the team win. And so that’s what you saw. He set the tempo for practice every day for that position group. We were looking for somebody that was going to become the alpha dog. And his way of being an alpha dog may be different than other people’s, but he separated himself as a guy that I felt like could truly embody what it means to be the starter and then carry that load.”

He came to UVA with that goal, Jones said. “I knew it was a long shot to everybody else, but it was something that I believed that I could do if I put in the work for it.”

The challenge for Jones now, offensive coordinator Des Kitchings said, is “to stay consistent. He set the floor [against Richmond]. He set the expectations, and he’s been building that way in training camp. So now it’s consistency and continuing to do that.”

For all his nerves last weekend, Jones said, “I was ready as well. It was something that I trusted my hard work prepared me for. And then during the game, I just wanted to get that first hit, and once I got that first hit, it was just like practice and it was just football at that point. And then after the game, it was a surreal moment. Working so hard for so many years, not knowing when that opportunity would come. And then when it came and being able to perform as I did, it was definitely rewarding.”