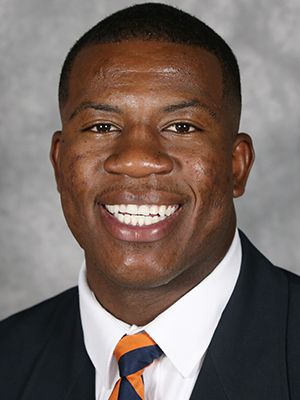 AT VIRGINIA
2021 – Appeared in all 12 of UVA’s games and started in 11… eighth in the ACC in passes broken up with nine total… seventh in the ACC in interceptions with three… fifth on the team in total tackles with 44… made his season high of tackles of seven against Wake Forest… made 2.0 tackles for loss on the season.

PREVIOUS SCHOOL
A transfer from Louisville where appeared in 32 games with five career starts … made 42 career tackles, 4.0 tackles for loss, two interceptions and broke up 15 passes … appeared in eight of Louisville’s 11 games in 2020 with one start. Johnson is the only player in Cardinal football history to break up a pass on three consecutive plays, a feat he accomplished in 2020 against Florida State … in 2019 Johnson made 27 tackles, 2.0 tackles for loss, broke up seven passes, had one interception, forced three fumbles and recovered another for the Cardinals … graduated from Louisville with a degree in marketing.

HIGH SCHOOL AND PERSONAL
A 2017 graduate of Chaminade-Madonna Prep in Hollywood, Fla., where he played cornerback for head coach Dameon Jones … earned all-state and All-Broward County honors in 2016 … made 30 stops with 10 passes broken up and three interceptions as a junior in 2015 … named a three-star recruit by ESPN.com, Rivals.com and 247Sports.com … ranked No. 89 on ESPN’s top 300 safeties … considered one of the best defensive backs in the Florida … also participated in track & field at Chaminade-Madonna Prep … son of Sheniqua Johnson and Anthony Johnson…pursuing a master’s degree in Educational Psychology.

Johnson Making Himself at Home at UVA
Football

Johnson Making Himself at Home at UVA