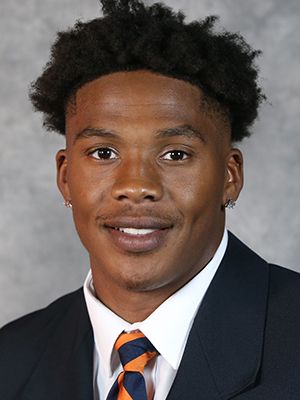 CAREER
Set the UVA single-season receiving yards record with 1,203 in 2021 … 12th on UVA career receiving yards list (1,694) … 183 yards receiving at North Carolina in 2021 were the sixth-most by a UVA wideout in a single game … had a reception in each of his final 20 games played … 34 receptions of 20 yards or more, the most by any Cavalier since 2000 … six of his 12 career touchdown passes went for 40 or more yards … caught 12 of Brennan Armstrong’s school record 58 career touchdown passes, the most of any receiver.

AT VIRGINIA
2022 – Started the first eight games of the season before missing the final two with an injury … Caught a pass in all eight games he played in …  Second on the team with 30 receptions and 430 yards receiving … Ranked in the top-16 in the ACC in receiving yards per game (12th – 53.8) … receptions per game (14th – 3.8) and yards per reception (16th – 14.33) … caught Brennan Armstrong’s program-record, 57th career touchdown pass, a 44-yard catch and run at Georgia Tech on Oct. 20. 2021 … scored his first touchdown of the year on a 40-yard strike from Brennan Armstrong against Louisville on Oct. 8 … amassed a season-high 99 yards receiving against the Yellow Jackets on Thursday night including two 20+ yard receptions (37 & 44). 2021 – Set the Virginia single-season receiving yardage record with a 19-yard reception against Virginia Tech, surpassing Herman Moore’s record of 1,190 yards set in 1990 and totaling 1,203 on the season… Averaged 21.1 yards per reception, the most in the ACC and fifth best in the nation… Tied Germane Crowell (1997) for most 100+-yard receiving games in a single season in UVA history with six total… Appeared in all 12 games for the Cavaliers, starting 11 of them… Became the fifth Cavalier to eclipse 1,000 yards receiving in a season after catching two passes for 32 yards against Notre Dame on Nov. 13… Matched Herman Moore as the fastest UVA wide receiver to 1,000 yards (10 games)… Caught 27 passes of 20 yards or more, the most in a single season by a UVA wide receiver since 2000 … Recorded three-straight 100-yard receiving games beginning with Duke on Oct. 16 joining Germane Crowell (1997) as the only UVA wideouts with three-straight 100-yard receiving games… Earned his second-straight ACC Wide Receiver of the Week award on Oct. 25 after catching six passes for 168 yards and two touchdowns against Georgia Tech, the first UVA wideout since Herman Moore in 1990 to win back-to-back ACC Wide Receiver Week honors… His 77-yard catch and run in the second quarter against Georgia Tech was the longest play from scrimmage for UVA in 2021. 2020 – Suffered a season-ending injury in preseason camp. 2019– Appeared in 10 of UVA’s 14 games … one of 17 UVA true freshmen to appear in 2019… made collegiate debut at Pitt… caught one pass in the win against Duke… his first career reception went for 12 yards… caught two passes for 49 yards and his first collegiate touchdown against Liberty… his receiving touchdown against Liberty went for 44 yards on a pass from Brennan Armstrong.