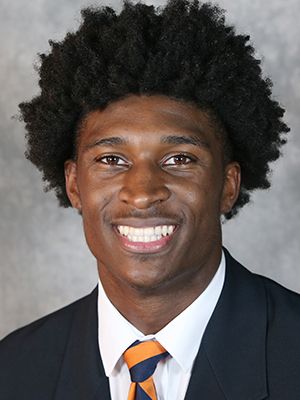 HONORS
2022 – One of 61 players and eight ACC student-athletes on the 2022 Comeback Player of the Year watch list – FWAA Freshman All-American Watch List.

AT VIRGINIA
2022 – Started six of the first seven games of the season … caught a pass in each of the first eight games … sat out games against North Carolina (11/5) and Pitt (11/12) due to injury … led the nation with 23.19 yards per reception … of his 16 catches on the season, seven receptions have gone for 20 yards or more, tied for the most on the team …against Louisville on 10/8 matched a career-high with four catches including a 17-yard reception in the fourth quarter from Brennan Armstrong that broke the program’s all-time passing yards record … in season opener against Richmond led all Cavalier pass catchers with 89 yards receiving on four catches and scored the season’s first touchdown, a 56-yard reception in the first quarter … His lone catch against Syracuse on 9/23 went for a touchdown and gave UVA its first lead of the contest. 2021 – Did not appear in any games due to injury. 2020 – Appeared in eight of UVA’s 10 games with seven starts … finished No. 2 in the nation and No. 1 in the ACC with 25.75 yards per reception average … No. 7 in the nation among freshmen with 515 receiving yards … tied for No. 5 in the nation among freshmen with five receiving touchdowns … only player in the nation with 500+ receiving yards on 20 or fewer receptions … one of 12 UVA true freshmen to appear in a game … one of five FBS players since 2000 to record 500+ receiving yards on 20 or fewer receptions … No. 2 all-time among UVA freshmen receivers with 515 receiving yards … named ACC Receiver and Rookie of the Week after becoming the first Cavalier to record 100+ receiving yards in their collegiate debut when he caught four balls for 101 yards and two touchdowns in the season-opening win against Duke … both of his touchdowns against the Blue Devils came in the fourth quarter, a period UVA entered trailing by three points (20-17) … made first collegiate start at No. 1 Clemson and finished with two catches for 58 yards … caught three passes for 51 yards and a touchdown against NC State … named the ACC Rookie of the Week after recording four receptions for 74 yards and one touchdown in the win over Louisville … recorded one reception for a 90-yard touchdown against Abilene Christian … the reception tied for the fifth-longest pass play in program history and the longest by a Cavalier since Emmanuel Byers found Deyon Williams for 90 yards against Miami in 2005 … the pass play is tied for the fifth-longest in the nation in 2020 and was the longest in the ACC in 2020 … caught three passes for 66 yards against Boston College … caught three passes for 75 yards at Virginia Tech.

HIGH SCHOOL AND PERSONAL
Played wide receiver and safety at Woodland High School for head coach Eddie Ford … earned all-state honors after making 40 catches for 622 yards and seven touchdowns as a senior … selected to play in South Carolina’s North-South all-star game … collected 70 receptions for 1,007 yards and 15 touchdowns as a junior … also plays basketball and runs track for Woodland High School … a three-star recruit by ESPN.com Rivals.com and 247sports.com … major is undecided in the College of Arts and Sciences… recipient of the 2022-23 Danny Lee Fassio Family Bicentennial Scholarship.

Davis Coming Up Big for Cavaliers