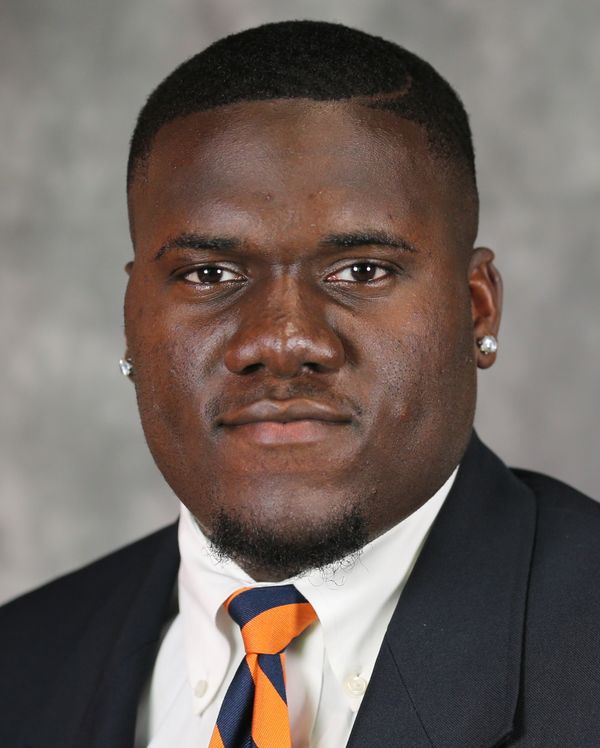 AT VIRGINIA
2021 – Started all 12 games of the season and 32-straight, which dates back to 2019… Played 910 snaps on the season, the most by any ACC center… According to Pro Football Focus, Oluwatimi was rated the number two center in the nation in run blocking and led the ACC… Graded out at 88.2 percent (Pro Football Focus) and had nine pancake blocks against Illinois helping him earn ACC Offensive Lineman of the Week on 9/13. 2020– Started all 10 of UVA’s games at center… spearheaded an offensive line that ranked No. 1 in the ACC and No. 12 in the nation in tackles for loss allowed (4.2), while also ranking No. 2 in the ACC with 2.0 sacks allowed a game… called the protections for an offensive line that ranked No. 3 in the nation among “Power-5” schools in most rushing yards before contact per rush attempt (2.70), trailing just Ohio State and Notre Dame… had a 99 percent target success rate on pass pro opportunities, while his run calls through three games stands at a 96 percent target success rate… allowed only one sack and had 20 pancake blocks in one-on-one blocking situations for the Cavaliers in nine ACC games. 2019 – Started 13 of UVA’s 14 games at center… missed the start against Old Dominion with a hand injury, but played at both guard positions against the Monarchs… set the pass protection and had a 97 percent target success rate in five-on-five/six protections… allowed zero sacks and zero quarterback hits… helped block for quarterback Bryce Perkins, one of two quarterbacks in the nation with 3,000+ passing yards and 700+ rushing yards… blocked for Perkins as he broke the UVA single-season passing record and single-season total offense record. 2018 – Did not appear in any games… sat out season to serve a year of residence due to the NCAA transfer rule.

PREVIOUS SCHOOL
Spent the 2017 season at the Air Force Academy, but did not play in any games.

HIGH SCHOOL AND PERSONAL
Played offensive line at DeMatha Catholic for head coach Elijah Brooks … team captain as a senior … twice was named all-conference … named an Eastbay Freshman All-American … played his freshmen season on varsity at Archbishop Carroll … was on the Principal’s List every semester in high school … son of Yetunde and Olufemi Oluwatimi … has four brothers and one sister … his brother, Oluwaseun Oluwatimi, is a defensive lineman at Maryland … major is economics.

Oluwatimi Named a Finalist for the Rimington Trophy
Football

Oluwatimi Named a Finalist for the Rimington Trophy

Oluwatimi Out to Make Name for Himself at UVA
Football

Oluwatimi Out to Make Name for Himself at UVA

Oluwatimi Proves To Be Perfect Fit at UVA
Football

Oluwatimi Proves To Be Perfect Fit at UVA