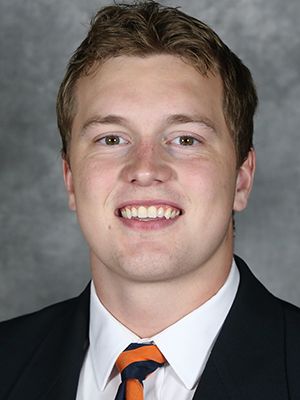 AT VIRGINIA
2021 – Appeared in 10 of UVA’s games… made his collegiate debut against William & Mary… made three tackles against Duke… one of 14 true freshmen to appear in 2021.

HIGH SCHOOL AND PERSONAL
Spring semester enrollee … played linebacker and wide receiver at North Cross High School for head coach Stephen Alexander … earned all-state honors as a receiver and as a linebacker after helping the Raiders to an 11-1 record and a VISAA Division II state championship in 2019 … caught 29 passes for 575 yards and 10 touchdowns in 2019, while also notching 77 tackles, 8.0 TFLs and 9.0 sacks … in a shortened 2020 season due to the COVID-19 Pandemic, he made 29 tackles, 4.0 TFLs and 2.0 sacks … also caught 11 passes for 202 yards and two scores … played freshman year at Pulaski County High School … a three-star recruit by ESPN.com, Rivals.com and 247sports.com… major is undeclared in UVA’s College of Arts and Sciences… recipient of the 2022-23 Edmund F. Garno III Endowed Football Scholarship.