CHARLOTTESVILLE – When University of Virginia football players took the field Monday morning for the ninth practice of training camp, there was something different about more than three dozen of them.

They had had numbers on their jerseys.

When Bronco Mendenhall took over as the Cavaliers’ head coach after the 2015 season, he implemented many changes in the program. Most reflected his conviction that players should earn everything they receive and not have things simply given to them.

And so the Wahoos wear unadorned practice jerseys throughout the spring and for part of each training camp – until Mendenhall decides they’ve earned the right to add numbers.

This year? Forty-one players – none of them freshmen — selected their numbers on Aug. 11.

“Going into the third year, we’re accelerating the pace,” Mendenhall said after practice Monday. “There are less unknowns about more of our team. And so the team leadership is able to be selected earlier, and jersey selection is earned quicker. The intent, without compromising any of the core principles, is to just accelerate the pace.”

The number-selection process is driven not by the coaching staff but by a panel of 20 players. This group consists of 10 squad leaders and their assistants, players who have excelled not only on the field but in the weight room.

“Once they’re selected,” Mendenhall said, “then they meet and determine the jersey-selection order for the team.”

Running back Jordan Ellis, a fifth-year senior, picked first this year. So what else is new?

This marked the third straight summer Ellis has earned the first pick. He went with jersey No. 10 in 2016 – letting one of his elders on the team, defensive lineman Donte Wilkins, wear No. 1 – and then switched to No. 1 last summer.

Ellis stuck with No. 1 this year, and senior defensive back Juan Thornhill, picking second, stayed with No. 21.

The third pick went to running back PK Kier, who was one of 17 true freshmen to play for the Wahoos in 2017. The 5-11, 225-pound Kier has distinguished himself in the weight room this year, Mendenhall said, and his work ethic earned him a lofty spot in the selection process.

“Just because you’re young now doesn’t mean that you’re out of the early numbers,” Mendenhall said.

Kier said: “Hard work does pay off, and I’m just proud that I was able to work hard and pick third.”

Another round of numbers will be selected Saturday, Mendenhall said, and then a third round on Aug. 25. Virginia opens the season Sept. 1 against Richmond at Scott Stadium.

NUMBERS GAME: Of the 41 players who selected jersey numbers Saturday night, two are transfers who were at other schools last season: quarterback Bryce Perkins (No. 3) and offensive tackle Marcus Applefield (No. 71).

Six of UVA’s returning players changed numbers: running back PK Kier, from 26 to 6; running back Jamari Peacock, from 27 to 10; safety Chris Moore, from 39 to 7; linebacker Dominic Sheppard, from 30 to 9; linebacker Charles Snowden, from 38 to 11; and long-snapper Joe Spaziani, from 11 to 99.

Kier chose No. 6 in memory of his late cousin Brayden Kier, who died of cancer in June 2016. Brayden would have turned 6 this year, Kier said Monday.

During his battle with cancer, Brayden was treated at the UVA Medical Center. “That’s why I came here,” said Kier, a graduate of Millbrook High School in Winchester who wears a bracelet in memory of his cousin.

“I became connected with UVA like that, then got the [scholarship] offer, and it was meant to be.”

Kier wore jersey No. 1 in high school. At UVA, of course, that belongs to Ellis for another year. Ellis, who led the Cavaliers in rushing last season, is a role model for Kier, who has a similarly bruising running style.

“Basically, I just told PK, `You stand by Jordan and you do everything that Jordan does and learn in that realm,’ ” running backs coach Mark Atuaia said in April after the Cavaliers’ final spring practice.

“Jordan is the hardest worker on this team,” Kier said. “He works hard on the field and off the field. Wherever he is, he tries to be No. 1.”

UP-AND-COMER: Of the 12 players singled out last week for their performances in the offseason strength and conditioning program – they’ve been dubbed The Dirty Dozen — only two were true freshmen in 2017: linebacker Zane Zandier and defensive lineman Mandy Alonso.

The upperclassmen are “the standard, as we call it,” Zandier said, “so being able to be up in that group, it’s an honor.”

Alonso started four of Virginia’s final five games last season. The 6-3, 215-pound Zandier had a lower profile in the program, but he’s competing for playing time this summer at inside linebacker in UVA’s 3-4 defense.

“I’m just trying to make the most of my opportunities and just do what I can to get as much playing time as I can,” Zandier said, “and just play hard every single snap.”

A safety at Thomas Jefferson High School in Pittsburgh, Zandier was slotted at outside linebacker when he joined the Cavaliers’ program last summer. He moved inside late in training camp.

“It’s just a lot of learning,” Zandier said. “Reading the line and everything from the middle, it’s a little different from being on the outside. But this year especially I’m feeling a lot more comfortable in all our checks. Being able to be comfortable and confident with the call, it helps me play faster and play stronger.”

“There’s nothing that makes me feel better than having the former players back,” Mendenhall said. “Number one, I want them to feel welcome. Maybe even more importantly, I want them to feel good about what’s happening here, believe in what we’re doing, and then show their support. So that matters a lot to me, as well as to our team.” 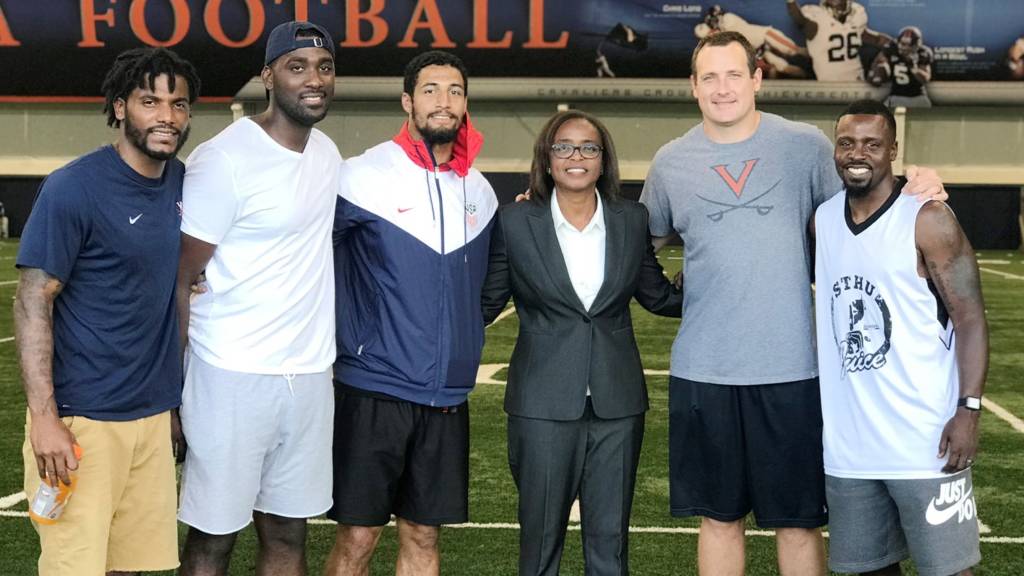 Mendenhall praised the efforts of UVA athletics director Carla Williams and deputy AD Jim Booz to help the alumni “connect and reunite” with the program.

“I think the former players are really enjoying that, and my team, it’s hard to put a value on that,” Mendenhall said. “I watch them as they practice and they’re looking over and seeing who’s here. It matters.”

Blanding is a rookie with the Washington Redskins, whose training camp is in Richmond. He was back in Charlottesville on Friday night.

“Quin has an off day from playing professional football, and he comes back to watch us practice,” Mendenhall said. “That’s a pretty powerful statement on an off day, to go watch practice of your former team. It mattered a lot to our guys.”

SIGNS OF PROGRESS: Injuries have left them thin on both lines, but the Cavaliers held their first scrimmage of training camp Saturday at Scott Stadium.