CHARLOTTESVILLE –– When Gerry Capone drove up on his scooter at the conclusion of practice last Thursday morning, University of Virginia wide receivers coach Marques Hagans didn’t know what was happening. Nor did wideout Hayden Mitchell.

Hagans thought head coach Bronco Mendenhall might chew out Capone, UVA’s associate athletics director for football administrator, for riding on the team’s new grass practice field. Mitchell figured Capone’s entrance had something to do with the end of training camp.

Neither Hagans nor Mitchell was correct.

“Gerry, what are you doing?” Mendenhall asked.

“I got a special delivery for you, Coach,” Capone replied, handing him two envelopes.

Mendenhall glanced at the envelopes. Then he addressed the players gathered in front of him.

“So, I don’t know what these are, but one says Hayden Mitchell and one says Coen King,” Mendenhall said, setting off a frenzied celebration. Their teammates swarmed over Mitchell and King, the latest Cavaliers to earn scholarships after joining the program as walk-ons.

“The whole day was awesome,” Hagans said. “It was fun to watch. I’m happy for Hayden, and I’m happy for Coen as well. They’re two guys that really embody hard work, and they don’t just deserve it. They earned it.”

Mitchell said the announcement “was a total surprise,” and Hagans wasn’t expecting it either.

“That was really Coach’s decision,” Hagans said. “He asked for input [from the staff] but never gave a timeline of when that might happen. It was easy to keep a secret, because I really didn’t know for sure when or if it would happen.”

Mitchell said: “Coming in as a walk-on, you always have that goal of earning a scholarship, but to be honest, it stays in the back of your mind, I think. It’s not something you focus on every day. Regardless of if you earn it or not, you want to work as hard as you can.”

I could not be more proud of @mitchelld17 he is the epitome of selflessness, sacrifice and humility. All he does is show up everyday smile and work hard. Proud to be your coach. Love you boy!!#GoHoos#TheStandard https://t.co/Mim6k5kLE2

After his teammates dispersed, Mitchell went into the George Welsh Indoor Practice Facility and sat by himself.

“I just thought of all the hard workouts that my teammates and I have gone through, and all the early mornings, and all the extra meetings, all the extra times we got work in,” he said. “I also thought about all the other walk-ons, both in my class and the classes below me and ahead of me, that haven’t had the opportunity to earn a scholarship, and it just made me think about how much they put into the program. Sometimes their work doesn’t get recognized, and I feel like regardless of scholarship or not, the walk-on culture here at UVA is so strong, and everyone puts in an incredible amount of effort.”

"He’s never complained. He’s just come in and worked from day one. I think sometimes you’ve got to do a little bit above and beyond to get recognized as a walk-on, because you’re always slated behind guys that are scholarship guys. But he’s amazing. I’m very fortunate to be his coach.” -- UVA receivers coach Marques Hagans on Hayden Mitchell

Mitchell first called his mother with the news, and then his father. Then came calls to his two siblings, sisters Bronwyn and Carlyn, a second-year UVA student and a St. Catherine’s School senior, respectively. Mitchell grew emotional on each call, even after telling himself he wouldn’t.

“Just talking to the four of them made me realize how grateful I am for them and all the support that they’ve given me over the number of years I’ve been playing sports, and the sacrifices that they’ve made,” said Mitchell, who grew up in western Hanover County, about a 55-minute drive from Charlottesville. “It was pretty cool to hear their reactions and how proud they were of me.”

Hagans compares walk-ons to undrafted free agents in the NFL. Both start off with ground to make up on more established players.

“But that’s right up Hayden’s alley,” Hagans said. “He’s never complained. He’s just come in and worked from day one. I think sometimes you’ve got to do a little bit above and beyond to get recognized as a walk-on, because you’re always slated behind guys that are scholarship guys. But he’s amazing. I’m very fortunate to be his coach.”

At St. Christopher’s, Mitchell was a four-year letterwinner in baseball, and that was the sport he expected to play in college. On the eve of his senior year, however, “I kind of realized I’d burned out and I wasn’t ready to commit to four more years of baseball,” Mitchell said.

He had no intention of playing college football, either, but after a senior season in which Mitchell caught 49 passes for a school-record 1,345 yards and a school-record 14 touchdowns for the Saints, head coach Lance Clelland and Shawn Moore sought him out. Moore, who had a legendary career as a UVA quarterback, was then the director of community and inclusion, and an assistant football coach, at St. Christopher’s.

“They both me asked if I’d have any interest in playing college football,” Mitchell recalled, “and I said, ‘Sure, why not? I’ll test the waters.’ So I took visits to UVA, Wake Forest and Duke, and without a doubt UVA was my top choice.”

He joined Mendenhall’s program as a recruited walk-on in the summer of 2017. He did not appear in any games that fall, but Mitchell made a valuable contribution in practice. As Virginia prepared to face Georgia Tech’s triple-option offense, a rarity in FBS, then-graduate assistant Jackson Matteo suggested that Mitchell get a look at quarterback on the scout team.

Never mind that Mitchell never played that position at St. Christopher’s. With his athleticism and football IQ, he was able to do a credible impersonation of TaQuon Mitchell, the Yellow Jackets’ elusive quarterback. After the Wahoos rallied to defeat Georgia Tech 40-36 at Scott Stadium, a victory that made them bowl-eligible for the first time since 2011, Mitchell received ample praise from teammates and coaches.

“He did an awesome job,” Mendenhall said, “and without his extra work we don’t even have a chance to prepare.”

Asked this week about his stint as an option QB, Mitchell said: “That was a ton of fun, just going against Andrew Brown and Micah Kiser and Quin Blanding [in practice that week] and getting hit by them. I remember one time I got hit by Quin, and he just tapped my helmet and said, ‘Good job,’ or something like that. I was like, ‘Dang, I’m actually here playing with the big guys.’ ” 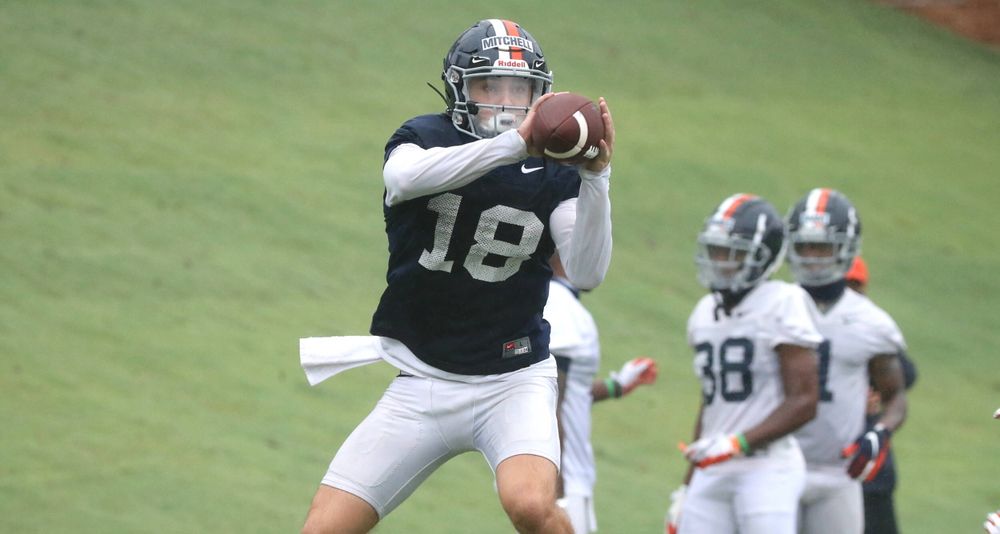 His profile in the program slowly grew. As a redshirt freshman in 2018, Mitchell appeared in five games, all on special teams. In 2019, when Virginia won the ACC’s Coastal Division for the first time, Mitchell played in all 14 games, started on the kickoff team, and caught three passes for 51 yards. He also played periodically on the kickoff return, punt return, and punt units.

Don’t be surprised if the sure-handed Mitchell’s role increases again this season.

“He works his butt off, and he comes with a smile every day,” Hagans said. “He’s worked his way to become tough and dependable, and I have no reservations about playing him whatsoever. His teammates trust him, and he’s very smart, too. He knows every position on the field, so he’s a luxury to have.”

Mitchell said: “I’d love to be able to contribute as much as I can on the offense. I feel like I can plug in to any receiver position, inside or out, and know what to do and do it to the best of my ability. Any way that I can help contribute to the offense, I’m ready for it.”

An economics major who has a minor in the Frank Batten School of Leadership and Public Policy, Mitchell is on track to graduate in May. He’s living this academic year with offensive tackle Bobby Haskins and kicker A.J. Mejia.

With the COVID-19 pandemic ongoing and much of the student body back in town, Mitchell knows it’s more important than ever for the football team to follow the protocols put in place by the UVA athletics department. He’s confident the Cavaliers will do so.

“Like some of my teammates have said, this is a program built on hard things together,” Mitchell said.

This is likely to be the final college season for a number of players on the team, Mitchell noted, “and I think it puts an extra onus on protecting the season for those older guys like [sixth-year senior defensive lineman Richard] Burney. That’s near and dear to the hearts of a lot of guys on the team, and I think that we’re willing to do whatever to play.”

Mitchell, who wore jersey No. 83 in each of the past two seasons, was the among the first group of players to select their jersey numbers last month. This time he chose No. 18, as a tribute to Hagans and former UVA wideout Ben Hogg.

Like Mitchell, Hogg came to UVA as a walk-on and later earned a scholarship. Hogg also wore No. 18 in honor of Hagans, who had a celebrated career for the Cavaliers as a wide receiver, punt returner, and quarterback.

“Ben Hogg is an amazing young man I had an opportunity to coach,” Hagans said. “I never knew that number would have as much significance. It was just the number I wore, but if that’s the reason why [Hogg and Mitchell chose it], that is humbling.”