CHARLOTTESVILLE –– During a special teams period at practice this week, Keytaon Thompson burst through the line of scrimmage and nearly blocked a punt.

When he arrived at the University of Virginia this summer, Thompson never expected to line up anywhere other than at quarterback, the position he played at Landry-Walker High School in New Orleans and then at Mississippi State. But he now spends most of his time at wide receiver, and he’s also an intriguing option for special teams coordinator Ricky Brumfield.

“It’s fun, actually, to play other positions like special teams,” Thompson said on a Zoom call Wednesday. “Being on the punt return [unit] and getting a chance to block a punt, it’s my first time. All these things are new for me, and it’s fun learning. I feel like that’s one of my strengths, that I’m a fast learner.”

His résumé reflects that. Thompson needed only three-and-a-half years to graduate from Mississippi State, where he majored in kinesiology, with a concentration in sports administration. At UVA, he’s pursuing a master’s degree in higher education in the Curry School of Education and Human Development.

As a football player, Thompson “works hard, he trains well, he’s got a really good mindset,” UVA offensive coordinator Robert Anae said, “and the biggest thing I’m excited for is, he’s working on his master’s degree. If we get young men in our program, their development off the field is every bit as important to me as their development on the field.”

The 6-4, 215-pound Thompson could have stayed at Mississippi State. But the Bulldogs changed coaches after last season, and with two years of eligibility remaining—he appeared in only one game in 2019 and was able to take a redshirt—Thompson decided to start fresh elsewhere.

When he entered the transfer portal, UVA had only three scholarship quarterbacks (redshirt sophomore Brennan Armstrong, redshirt junior Lindell Stone and true freshman Ira Armstead) and was actively looking to add another dual threat at that position. Thompson qualified as such. At Mississippi State, he appeared in 20 games, with two starts, completing 50 of 105 passes for 846 yards and eight touchdowns, with three interceptions. He rushed 99 times for 672 yards and 10 TDs.

Brumfield already knew about Thompson’s character and athletic prowess. Both grew up on New Orleans’ West Bank, and when Brumfield was an assistant at Western Kentucky, he tried to interest Thompson in the Sun Belt Conference school.

“I didn’t have a chance,” Brumfield said, laughing.

The situation was different this time. Brumfield contacted Thompson and told him about the Cavaliers’ offensive system and head coach Bronco Mendenhall’s philosophy. That Brumfield knows many of the coaches for whom Thompson played in New Orleans only strengthened UVA’s position.

“K.T. came up under people I’ve recruited and coached before, and guys that I know personally,” Brumfield said. “So the comfort level for him was there, because everyone that he grew up under was able to vouch for me. That kind of gave me a leg up. And then he saw an opportunity to have a legitimate shot to come in and compete, which was all he wanted. He didn’t want anything guaranteed. He just wanted to come in and compete, and that’s what I promised him.” 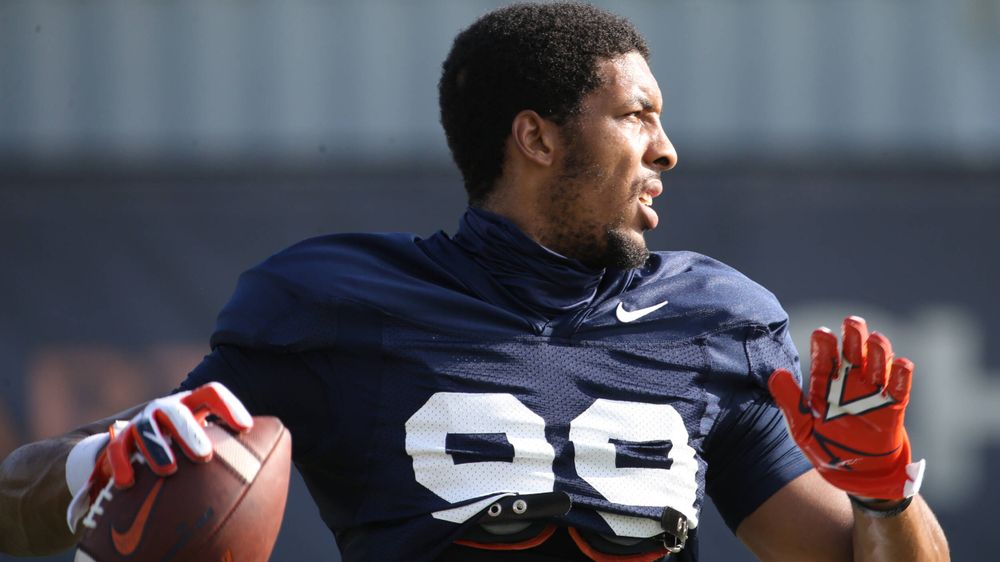 Thompson, who turns 22 this month, said he chose Virginia because of “the culture and the coaching staff and the system they have going on here. It felt like I’d fit in great and become everything that I wanted to be, on and off the field.”

In training camp, Thompson battled Armstrong for the starting job. But Armstrong, who backed up Bryce Perkins in 2018 and ’19, had a decided edge in familiarity with Anae’s system, and his lead grew when a shoulder injury sidelined Thompson.

“When I first got injured in camp, I think for the first day or so I did nothing in practice,” Thompson said, “just sat around and watched, because I couldn’t throw the football.”

The coaching staff had floated to Thompson the possibility of working at receiver if Armstrong won the starting job at quarterback. The idea appealed to Thompson, who didn’t want to be a spectator while his teammates practiced. He and the coaches “came to a mutual decision,” Thompson said, and he began practicing at wideout.

“I didn’t sit in on that initial conversation, and I don’t know which way it transpired,” wide receivers coach Marques Hagans said, “but I will say that once it did, the dude has been like the ultimate team player. No complaining, no nothing, just, ‘How can I help the team?’ ”

In Virginia’s season-opening win over Duke, Thompson had no receptions. His most memorable moment was the incompletion he threw on a trick play. Armstrong was his target.

“I hadn’t warmed up or anything,” Thompson said, smiling. “Coach snuck that in, and I had to get ready real quick.”

A week later, Thompson broke through on the road against top-ranked Clemson. In the third quarter, he caught a 3-yard touchdown pass from Armstrong.

Thompson is used to being on the other end of TD receptions, and this “was different,” he said. “It was exciting. Catching a touchdown, it was crazy. I kind of had a feeling that I would be open when Coach called the play. It had worked all week in practice.”

He was uncovered in the end zone, and it “was one of those balls that’s just hanging in the air so long,” Thompson said. “You’re just like, ‘I’ve got to catch this.’ ”

Thompson confidently secured the football, and “to see him score a touchdown, it was a culmination of so much hard work that he had put in,” Hagans said. “He shows up every day ready to work, and he’s a great teammate, and he’s fun to be around.”

Mendenhall said: “He’s been remarkable. He mentioned at one point, this was weeks back, that he feels like a little kid again just playing football. Sometimes that happens, where you just need to restart, not only at a new place but maybe at a new position.

“He’s embraced the position. He’s learning, growing, developing. He’s big, he’s fast and he’s physical, so we’re still exploring what he can do … I don’t even know everything he can do, so the role is growing and it’s building. He’s on special teams as well, and not many quarterbacks have done that. So he’s learning how to cover kicks and hold up players and different things like that, and he’s doing it with a smile.”

Thompson had a legendary athletic career at Landry-Walker High, where he starred in two sports. “He is well known in South Louisiana, not just New Orleans,” Brumfield said.

In football, Thompson was named Louisiana’s Gatorade player of the year as a senior in 2016 after leading the Charging Buccaneers to their first state title. He passed for 46 touchdowns and ran for 26 that season.

In basketball, he led Landry-Walker to back-to-back state championships. Thompson’s ball skills have helped him in his transition to wide receiver, but “that’s the easy part,” Hagans said, laughing.

The former UVA great speaks from experience. Hagans came to Virginia as a quarterback in 2000 and then switched to wideout. (He returned to his original position in 2004, spent two seasons as the Cavaliers’ starting quarterback, and then played receiver in the NFL.)

"He's been remarkable. He mentioned at one point, this was weeks back, that he feels like a little kid again just playing football. Sometimes that happens, where you just need to restart, not only at a new place but maybe at a new position." -- UVA head coach Bronco Mendenhall on Keytaon Thompson

“I think a lot of people underestimate the time that it takes to become comfortable out there running routes. It’s not as easy as people think,” Hagans said. “Keytaon is still in the transition phase of just learning how to run routes and be a receiver, but he has great ball skills, and when the ball is in the air he goes up and gets it. But learning to really become a receiver and running routes and releases, getting in and out of breaks, those things really take time, and guys that have been playing receiver a long time still are working to perfect that.”

At noon Saturday, in a game to air on ACC Network, UVA (1-1, 1-1) hosts NC State (2-1, 2-1) at Scott Stadium. How large a role Thompson will play in the Cavaliers’ passing game against the Wolfpack is difficult to predict. Still, his potential at his new position is enticing, “because first of all he’s athletic, he’s big, he’s strong, he’s fast,” UVA defensive back De’Vante Cross said Monday. “What else do you want at receiver?”

Thompson had been to this state only once before enrolling at UVA. As a boy he played in a national AAU basketball tournament in the Tidewater area. He’s one of six players from Louisiana in the Cavaliers’ program, along with true freshmen Donovan Johnson and Brandon Williams, both of whom are also from New Orleans, sophomore Dontayvion Wicks (Plaquemine), true freshman Jonathan Horton (Baton Rouge) and sophomore Mike Hollins (Baton Rouge), who has opted out during the COVID-19 pandemic. Moreover, Brumfield and Jordan Arcement, one of the program’s senior scouts, are also Louisiana natives.

At Landry-Walker High, Thompson wore jersey No. 5 in football, and at Mississippi State he wore No. 10. Both were gone––Armstrong had chosen No. 5 and running back Perris Jones No. 10 a week earlier––when Thompson’s turn came to select his number at UVA on Aug. 22.

“I think I ended up going in the late second round, and they had some numbers left, but none in the teens and none in the 20s that I can remember,” Thompson said. “They had some numbers in the 80s I could have gone with and had a receiver number, but I still wanted to have that versatility. I didn’t want to wear 80 at quarterback. I’d rather wear 99 if I go back to quarterback.”

And so that’s what he went with. (Armstead, who’s also been working at wideout, selected No. 98.)

“When he picked No. 99, he couldn’t have been happier,” Hagans said. “It was genuine. He appreciated what he earned, and he never came into this program expecting to be given anything. Our program is really based on that, and he’s really answered the bell with what we’ve asked him. Earn everything. Work hard. He’s a selfless dude. I’ve been around a lot of players, as a player and as a coach, and he’s one of the greatest teammates I’d want to have as a player.”

Like Hagans did at UVA, Thompson may eventually return to quarterback. For now, though, he’s enjoying life at his new position.

“I’ll play wherever the team needs me,” he said. “If that so happens to be quarterback again, that’ll be fine. But if not, I’ll try to be the best wherever I can be for the team.” 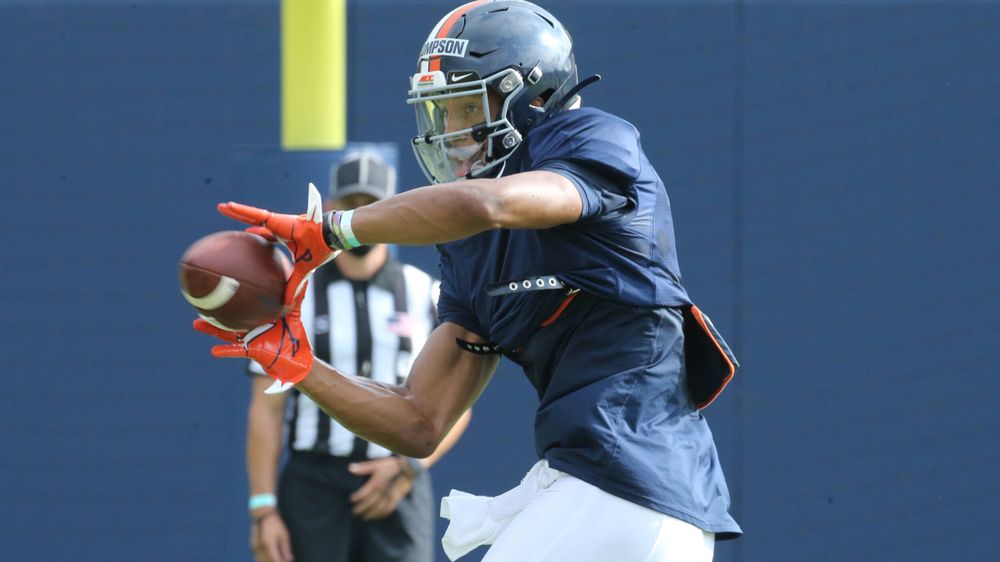