Taylor's Impact Felt Off Field, Too

CHARLOTTESVILLE –– For University of Virginia linebacker Noah Taylor, it’s been a frustrating season at times. Not only has Taylor battled injuries, the Cavaliers’ defense hasn’t consistently performed at a high level. For every shutout victory, there’s been a one-sided loss in which UVA has struggled defensively.

“It’s been a lot of ups and downs,” Taylor said.

On most Thursday mornings this fall, however, he’s experienced nothing but joy. After a year’s hiatus due to the COVID-19 pandemic, the Thursday’s Heroes program, a beloved tradition during head coach Bronco Mendenhall’s tenure at UVA, returned this season.

Each week during the season, a Central Virginia resident facing health challenges is welcomed into UVA’s football family. Thursday’s Heroes and their families tour the football complex and meet the team. Then, after practice, the Thursday’s Hero receives gifts from the players, signs the flag the Cavaliers carry onto the field with them before every game, and breaks down the team in a jubilant huddle.

Taylor, who’ll graduate next month with a bachelor’s degree in American studies, has assumed the role capably filled by Hasise Dubois in 2018 and ’19. Taylor, nursing a cold, let linebacker Nick Jackson take the lead with this week’s hero, Patrick Blow, but he’s usually the first player to interact with the guest of honor during the celebration.

Back with our favorite day Thursday Heroes!

Help us welcome Jack Callahan and his family to our Hoos family🔸⚔️🔸#GoHoos | #THEStandard pic.twitter.com/YEEy3Ba7IN

Jordy Bullock, the Cavaliers’ director of player relations, oversees the program. Before the season, Bullock said, Taylor expressed “an interest in taking on a larger role with Thursday’s Heroes. Noah really took it upon himself this year to make it his own. So he’s really standing out and showing how committed he is to creating such a memorable experience for all of our heroes that he’s met this year. He’s been doing a really great job.”

Bullock said he meets with Taylor at Wednesday evenings at the McCue Center, “just so I can give him a little extra information about who the Hero is, their background story, and he uses that as a preparation to spearhead all of the presentations on that Thursday morning by keeping all the guys on beat so we make sure to get everybody in there in the time we have.”

No matter how banged up he might be, or how daunting Virginia’s next opponent might appear, Taylor looks forward to Thursdays.

“We’re so caught up in our own lives that sometimes we fail to realize what other people’s struggles are and what everybody else is going through,” he said. “So it’s just nice. We’re at practice, we have a game on Saturday, we’re playing for the Coastal championship, and we’re taking time out of a Thursday practice to show our appreciation and recognition for somebody that needs it.”

With two regular-season games left, the Wahoos (6-4 overall, 4-2 ACC) remain contenders for the Coastal Division title, but they no longer have any margin for error. UVA must defeat No. 20 Pittsburgh (8-2, 5-1) on Saturday and Virginia Tech (5-5, 3-3) on Nov. 27 to win the Coastal and advance to next month’s ACC championship game.

“As you really consider where we are,” Mendenhall said, “I don’t think there’s a chance for two games to be more meaningful for a season and to our team than these two, with the implications … I think our team acknowledges that and understands it.”

In a 3:30 p.m. game to be broadcast on ESPN2, the Hoos will meet the Panthers at Heinz Field in Pittsburgh. That’s where Virginia opened the 2019 season with a 30-14 win over Pitt, a game in which Taylor blocked a punt.

A three-year starter for the Cavaliers, Taylor has made numerous big plays during his career. Highlights include his two interceptions in UVA’s 2019 victory over Virginia Tech and his 85-yard interception return for a touchdown against Louisville last season. He’s also dealt with a series of nagging injuries. They haven’t kept him off the field on game days, but they’ve limited his workload in practice and in the weight room.

“It’s just been a back-and-forth battle,” Taylor said, “and everything I’ve been through has just taught me lessons throughout my four years here.” 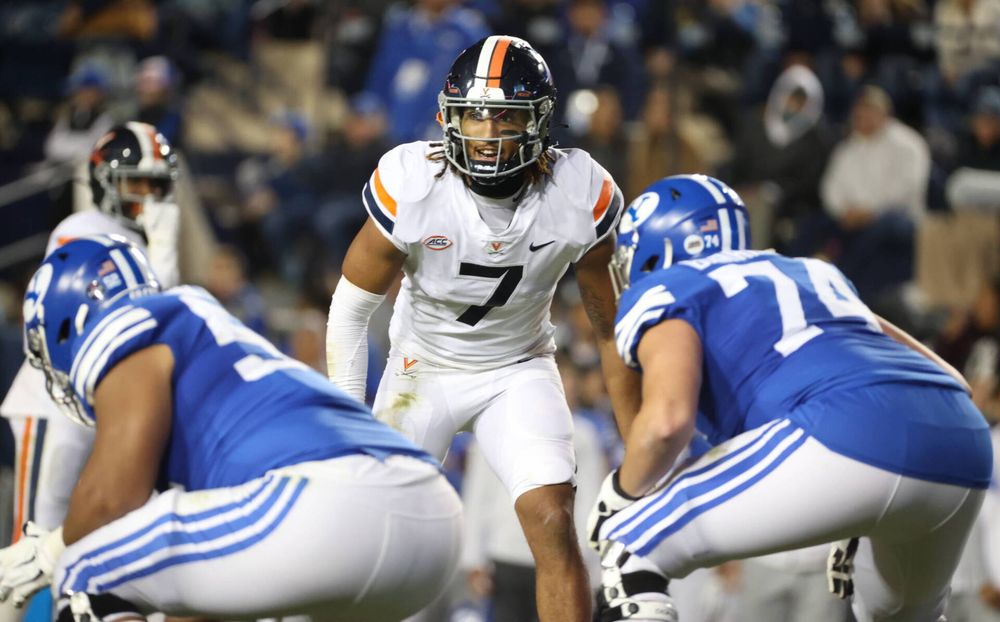 For Taylor’s first three seasons, his fellow linebackers included Charles Snowden, who’s now with the Chicago Bears. They both grew up in the Washington, D.C., area, and Snowden has been a mentor and friend to Taylor.

“I’ve really seen him mature into his own man,” Snowden said. “He’s really clear as to what he wants and how he goes about things.”

Snowden said he’s been impressed with how Taylor “has grown vocally as a leader and takes care of the younger guys, understanding the responsibilities that come with being one of the best players on the team.”

Taylor, a graduate of Avalon School in Wheaton, Md., weighed about 190 pounds when he enrolled at UVA in January 2018. He’s now a sturdy 235-pounder who leads the Hoos in tackles for loss (eight) and sacks (3.5) this season. He’s broken up four passes, recovered a fumble, and blocked a kick, and he’s third on the team in tackles, with 61.

That Taylor has been so productive “through limited preparation most of the year, actually,” Mendenhall said, makes his output even more impressive.

Taylor dislocated the pinkie on his right hand against Notre Dame last week, and that’s only his latest injury. He had knee, neck and back problems in 2020.

When healthy, Taylor offers an intriguing mix of size, speed and athleticism. In the spring of 2019, he reached blue, the second-highest level, in the Cavaliers’ strength and conditioning program. If not for the physical setbacks Taylor has had since then, he probably would have attained black, the highest level, said director of football development and performance Shawn Griswold. 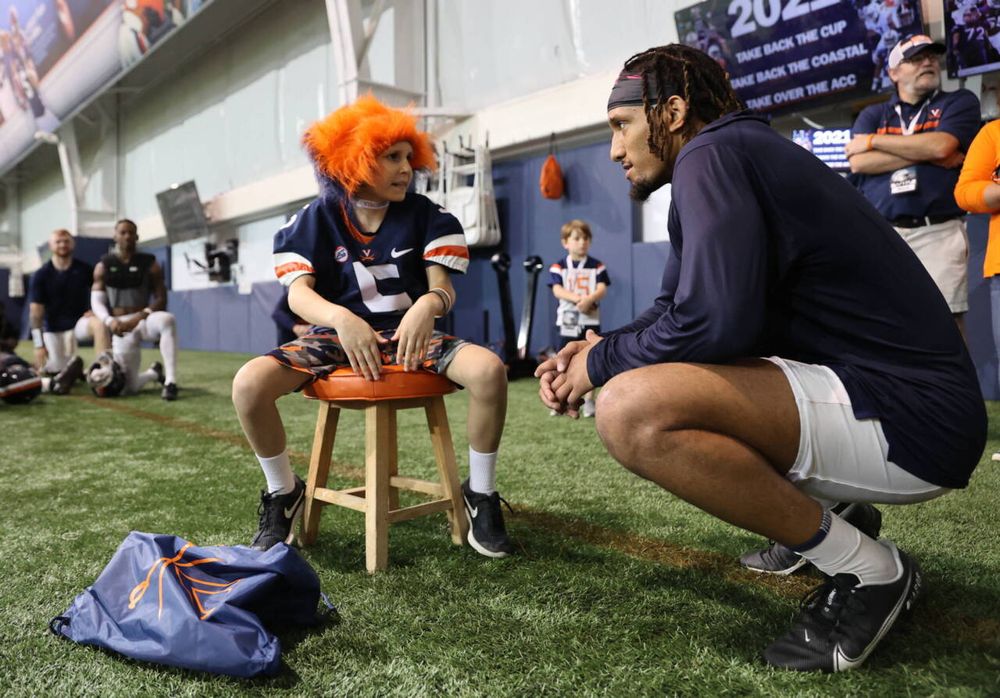 The defeats were disappointing for the Hoos, Taylor said, but “we’ve got to put that in the past. Holding on to that is going to have no benefits for us, so the best thing we can do is just realize we’re a good team and what happened in the past doesn’t really matter going forward.”

The Hoos take on another ranked opponent Saturday, and this one features an explosive offense led by quarterback Kenny Pickett.

“It’s going to come down to the wire,” Taylor said. “Pitt is always a hard team. They always play really, really hard, and really, really aggressive.”

Such statistics notwithstanding, this UVA defense has the talent to play much better than it has, Taylor believes, and “that’s definitely the most frustrating part.”

The Cavaliers became bowl-eligible with their win over Georgia Tech, and Taylor could play as many as four more games this season. When the season ends, he said, he’ll start seriously weighing his options. He has another year of eligibility and could play for UVA again in 2022.