Woods Coming Up Big for Hoos

CHARLOTTESVILLE –– Jelani Woods is about to play in his first Virginia-Virginia Tech game, but he’s no stranger to heated college rivalries. Another one changed the direction of his football career.

The annual series between Oklahoma and Oklahoma State is known as Bedlam, and as the rivals’ 2017 meeting approached, Woods’ coaches asked him to try something new.

Woods was in his first year at Oklahoma State, where he’d been working with the quarterbacks. The Sooners, however, had an elite tight end in Mark Andrews, and the Cowboys needed someone to impersonate him in practice. Woods accepted the assignment and “did a really good job at it,” he said this week.

And so ended his days as a quarterback. “The next week after the game, my coach called me in and said, ‘I think you’d be a really good tight end,’ ” Woods recalled. “I thought about it a little bit and talked to my parents. I wanted to get on the field, so I was just like, ‘Yeah, I’m going to roll with it.’ ”

Woods redshirted in 2017. Over the next three seasons, he started 28 games for the Cowboys and caught 31 passes for 361 yards and four touchdowns. His impact has been greater at UVA, to which he transferred in January after graduating from Oklahoma State.

Despite playing much of the season with a sprained right ankle that sidelined him for one game, Woods has 37 receptions for 534 yards and seven touchdowns for Virginia.

This week TE Jelani Woods gets to Break The Rock!!#GoHoos | #THEStandard pic.twitter.com/12ISJSVYZt

At 6-foot-7, Woods is impossible to miss on the field, and he’s been a key part of a record-setting passing game.

in 2020, Armstrong’s favorite targets included tight end Tony Poljan. a graduate transfer from Central Michigan. Poljan caught 38 passes for 411 yards and six TDs in his one season at Virginia.

With Poljan leaving, the Cavaliers had a need for a playmaking tight end, and the opportunity intrigued Woods. Before committing to UVA, however, he wanted to hear what Poljan had to say about head coach Bronco Mendenhall’s program.

“He endorsed it,” Woods said. “He said it was a really good place, Coach Mendenhall was really good and the coaching staff was really good, and he said I would love being here. And he was 100 percent right.”

Armstrong praised Woods’ blocking and said No. 0 is “not just out there to catch. He blocks his tail off.” On most plays, however, Woods leaves the line of scrimmage to give Armstrong another option in the passing game.

“If there was more volume and more circumstances where we had him in position to block, then the growth and development would have happened there probably at an equal rate as his pass-catching and his route-running. He just hasn’t been trained as much [in the run game], because that’s really not been our identity this year.” 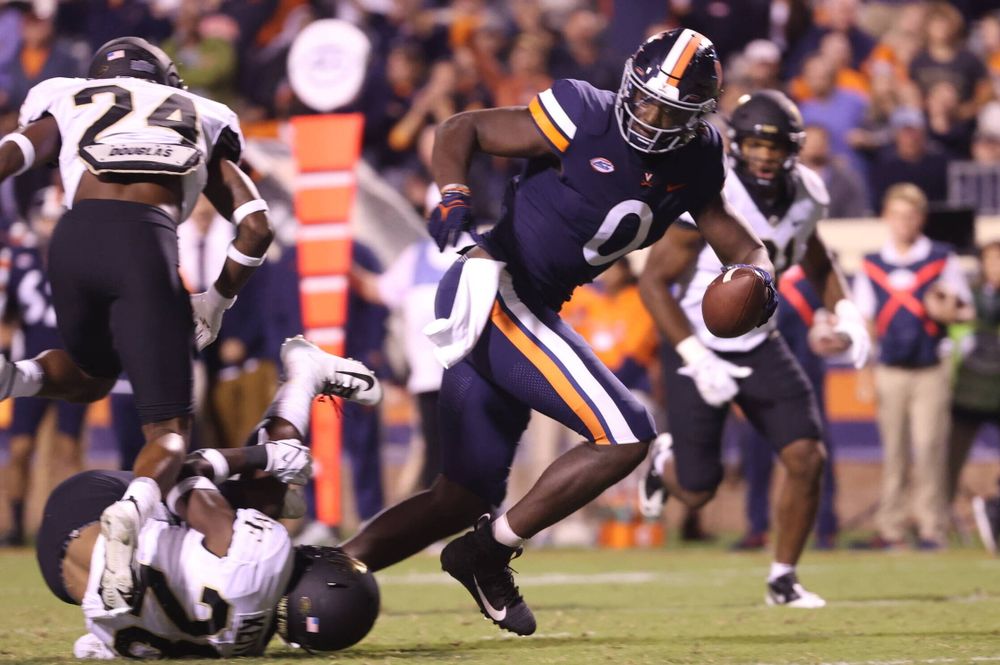 Woods grew up in the Atlanta suburb of Ellenwood, Ga., and led Cedar Grove High School to a state championship as a senior in 2016. The UVA roster is well-stocked with players from the Atlanta area, and “that makes it really comfortable for me,” Woods said.

At Cedar Grove, he played against current teammates Nick Jackson (Lovett School) and Jared Rayman (Pace Academy). Jackson, an inside linebacker, leads the Cavaliers in tackles this season, and Rayman is the scout-team quarterback.

In 2016, when Jackson was a sophomore and Woods a senior, Cedar Grove defeated Lovett 28-21. If he had any encounters with Jackson in that game, Woods said, he doesn’t remember them.

“I didn’t really get tackled that game against them, because I was slinging the ball all over,” he said, smiling.

Woods said he was 6-foot-5 when he enrolled at Oklahoma State. Not only did he get taller during his time in Stillwater, he grew broader. He was listed at 235 pounds on the Cowboys’ 2017 roster. When he arrived in Charlottesville, Woods said, he weighed about 275.

There’s less of him these days.

“I’m now about 258,” said Woods, who’s worked diligently with the Cavaliers’ strength and conditioning staff to reshape his body.

“My strength has actually increased a lot more as well,” Woods said. “It’s been a really good transition of bringing my weight down and increasing my strength.”

Woods sat out much of UVA’s season-opening win over William & Mary with cramps. His conditioning has steadily improved since then.

“He couldn’t make it until halftime [of the opener] based on our pace and what we expect and how we want to use him,” Mendenhall said. “So he went from that to where he is now.”

Late in the Wahoos’ Sept. 24 game against Wake Forest, Woods sprained his right ankle. He practices and plays with his ankle heavily taped, and he’s still not 100 percent, but “it’s gotten way better,” Woods said, “and I’m getting back to normal now.” 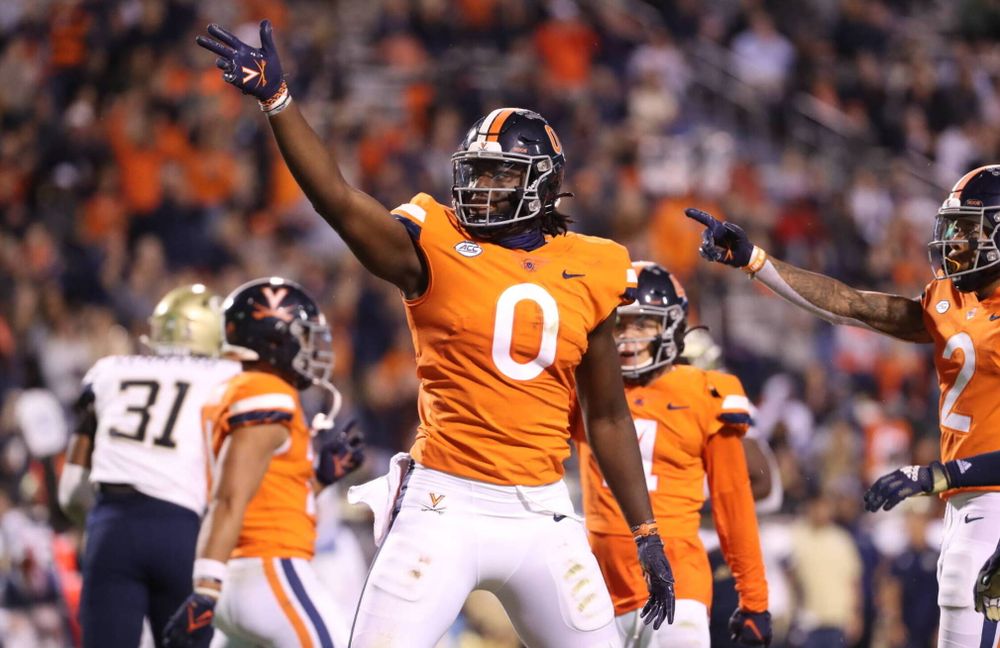 Growing up, Woods played tight end before he became a quarterback, so he had some familiarity with the position when he made the move at Oklahoma State. But he hasn’t come close to reaching his potential at tight end.

“This is Jelani’s first year as running up and down the field being a primary target, and that took some developing,” UVA offensive coordinator Robert Anae said. “So the work is still in progress, and we look for really good football [against Tech and in the bowl game] from Jelani Woods. Boy, are we appreciative and glad he’s here, because he’s transformed his body and he’s doing tremendous things. We’re still working on consistency, and I think that’s the case with every one of our players.”

For all the progress he’s made, Woods said, “I feel like I’m still at a beginning level. I feel like I can get way better as time goes on and I grow as a tight end.”

Woods will have another year of college eligibility after this season. He earned a bachelor’s degree at Oklahoma State in business administration, with a concentration in sports management. He’s pursuing a master’s degree in higher education from UVA’s School of Education and Human Development.

“I’ve definitely enjoyed it,” Woods said. “I feel like the whole aspect of learning under a new staff and the whole atmosphere of being in a new community under a new leadership team and head coach, it’s been a really good experience.”

In high school, Woods also starred in basketball, and he’s well aware that one of the nation’s top hoops programs resides at John Paul Jones Arena, right across the street from the McCue Center.

“I do miss it a little bit, but I know those days are behind me,” Woods said, smiling.