CHARLOTTESVILLE, Va. – The first Coach’s Corner with Fralin Family head football coach Tony Elliott is slated for Tuesday, Aug. 23 at 7 p.m. The show will be hosted by John Freeman, voice of the Cavaliers, and is set to air live every Tuesday (unless otherwise noted) in front of a live audience at BJ’s Restaurant and Brewhouse in Charlottesville. The show will be carried live on the Virginia Sports Radio Network, the Virginia Cavaliers Facebook page and VirginiaSports.com.

Fans are encouraged to come to BJ’s Restaurant and Brewhouse to watch and interact with the show. BJ’s full menu will be available which includes the world-famous Pizookie, the official dessert of UVA Athletics. Ticket and merchandise giveaways will occur during each show and fans will have an opportunity to have items signed by Coach Elliott. During the season, a Cavalier player will also join the show for a segment. 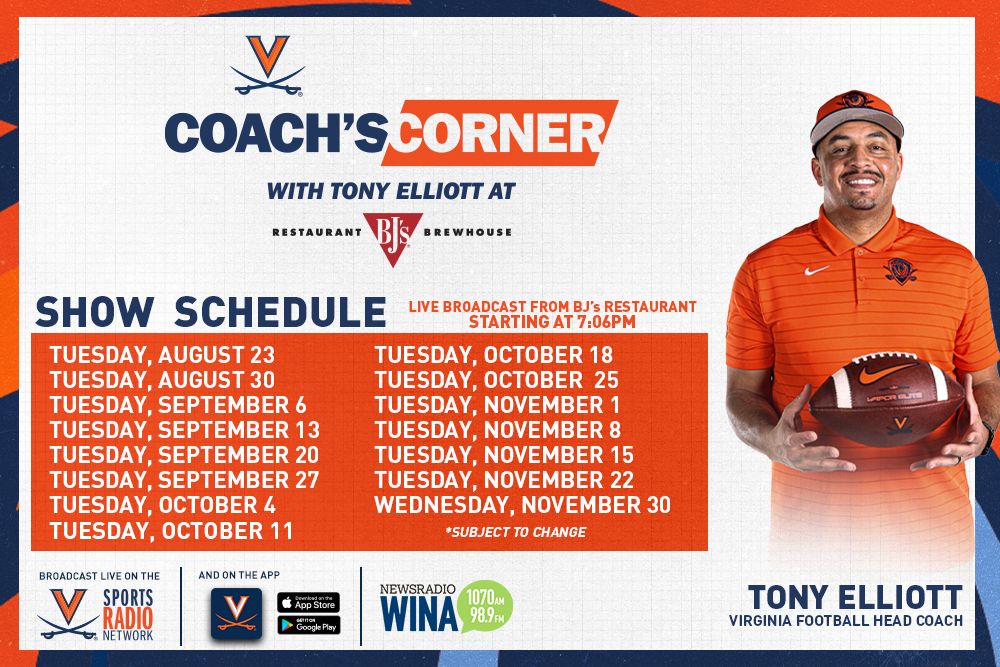 Freeman will host the Virginia pregame show one hour prior to kickoff as well as handle the play-by-play duties for the 2022 season. He will be joined on the broadcasts by former Cavalier defensive back Tony Covington (color analyst) and Jay James (sidelines).

New this year, WXVA-AM 610 & FM 102.9 will carry VSRN broadcasts in Winchester, giving further access to the northern part of the Commonwealth.

No Last-Minute Rally for Hoos in Loss at Syracuse
Football

No Last-Minute Rally for Hoos in Loss at Syracuse