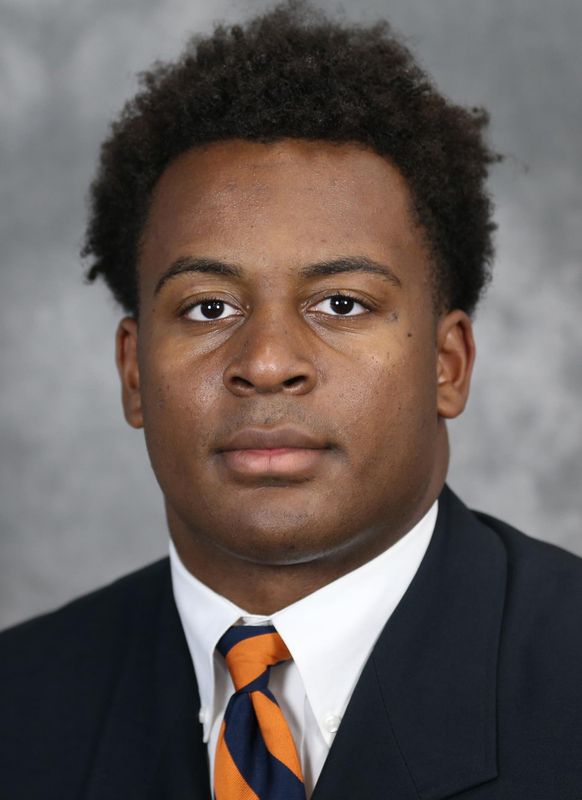 AT VIRGINIA
2021 – Jackson notched seven double-digit tackles on the season, with five of those games coming against ACC opponents… ACC’s top tackler, with a league-best 117 stops, 54 being solo stops and 63 being assisted… Started all 12 games for the Cavaliers… Matched a career-high of 16 tackles against BYU on Oct. 30, the fourth highest total of any ACC linebacker on the season… One of four UVA captains… 2020 – Started all 10 of UVA’s games… No. 2 in the ACC and No. 16 in the nation with 10.5 tackles per game… No. 6 in the nation and No. 2 in the ACC with 105 tackles… No. 2 in the ACC and No. 16 in the nation with 5.5 solo tackles per game… made a career-high 12 tackles in opening against Duke… added 1.0 tackle for loss… led UVA with 12 tackles at No. 1 Clemson… caught first collegiate pass on a fake punt against NC State… the play went for 26 yards… added seven tackles against the Wolfpack… made six tackles and 1.0 tackles for loss at Wake Forest… led UVA with 16 stops at No. 11 Miami… also added 1.0 tackle for loss and 0.5 sack against the Hurricanes… led UVA with 13 tackles, 1.0 sack and one forced fumble in the win over No. 15 North Carolina… led UVA with 10 stops against Louisville… added 1.0 sack in the win… made 11 tackles in the win against Abilene Christian… led UVA with 11 tackles in the win over Boston College… also broke up a pass against the Eagles… made seven tackles and 1.0 tackles for loss at Virginia Tech… named to 2021 ACC Academic Honor Roll. 2019 – Appeared in all 14 of UVA’s games with two starts… one of 17 UVA true freshmen to appear in 2019… made collegiate debut on special teams at Pitt… recorded two tackles against William & Mary… notched three tackles against Duke… made four tackles on defense at Louisville… made first collegiate start at North Carolina after Jordan Mack missed the first half due to a targeting call in the Louisville game… made three tackles in the win against the Tar Heels… made two tackles and notched a 0.5 sack against Liberty… made one stop against Virginia Tech… made nine tackles and notched a 0.5 tackle for loss in the ACC Championship game against Clemson… started in the Orange Bowl against Florida after captain Jordan Mack was sidelined with an injury… made four tackles against the Gators.

HIGH SCHOOL AND PERSONAL
Played linebacker and wide receiver at The Lovett School for head coach Mike Muschamp … made 95 tackles, 10 tackles for a loss, 2.5 sacks and caused one fumble in 2018 as a senior … also made 26 receptions for 406 yards and three touchdowns … recorded 57 tackles, 3.0 sacks and caused one fumble as a junior in 2017 … made 26 tackles and 8.0 tackles for a loss as sophomore … also made 26 receptions for 406 yards and three touchdowns in 2016 … will graduate with 72 career receptions for 1,224 receiving yards and nine touchdowns … averaged 17.0 yards per reception for his career … a three-star recruit by ESPN.com, Rivals.com and 247sports.com … major is undeclared and is currently studying in UVA’s College of Arts and Sciences … recipient of the 2022-2023 Gretchen Savin MacIlwaine Football Scholarship