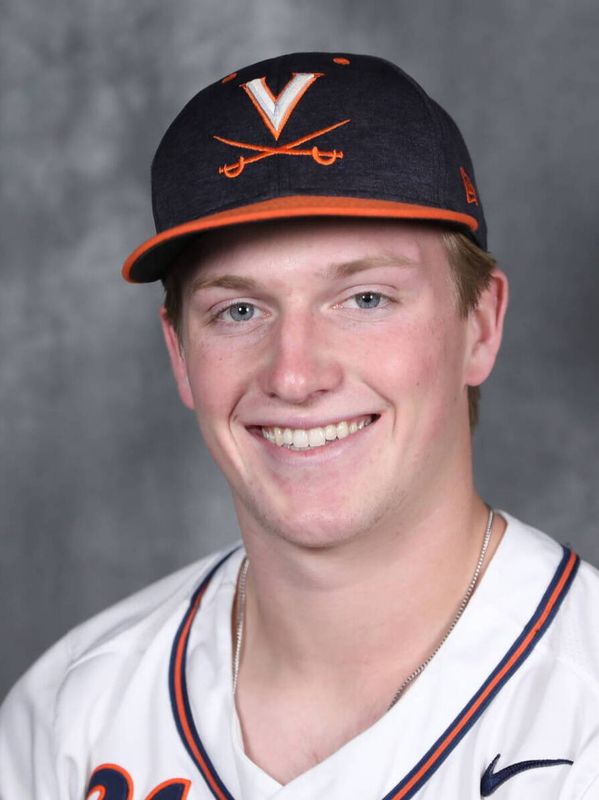 2022
• NCBWA First Team Freshman All-America shortstop, one of 10 listed on first team. Was the first Cavalier since 2013 (Joe McCarthy) to garner Freshman All-America honors from the NCBWA.
• A Second Team Freshman All-American according to Perfect Game.
• Listed on the ACC All-Freshman Team.
• One of five Cavaliers named to the ACC All-Academic Team and listed on the ACC Academic Honor Roll.
• One of six freshman nationally included on the Brooks Wallace Award Watch List on April 12.
• Started at shortstop and batted leadoff in all 58 games of his freshman campaign
• One of four true freshman (Mark Reynolds – 2002; Daniel Pinero – 2014; Cayman Richardson – 2018) to start at shortstop for UVA on opening day since 2002
• Led the team and was tied for seventh in the ACC in stolen bases with 17.
• Was statistically the fourth-hardest hitter to strikeout in the ACC, striking out once every 8.7 at bats. Only Landon Frei (Utah) was harder to strikeout (10.0 AB/K) among Power-5 freshmen.
• Batted .308 (70-for-227) with five doubles, a triple, two home runs and 39 RBI. His 56 runs scored were the third most on the team and tied for the second most by a UVA freshman since 2004.
• Hit his first collegiate home run in a 7-6 extra-inning win over Boston College on March 18. His other home run also came in league play, a solo shot in the series opener against North Carolina (April 22)
• Put together four, four-RBI games, three came against ACC opponents.
• Went 6-for-14 with three runs scored and 8 RBI in Georgia Tech series.
• Reached base safely in the final 18 games of the regular season, tied for the fourth-longest streak on the team.
• Recorded his first collegiate hit (single to right) on the first pitch he saw in the season opener against Bellarmine (Feb. 18)

SUMMER 2021: Named the Perfect Game Collegiate Baseball League Player of the Year … played 42 games for the Auburn Doubledays in their inaugural season in the PGCBL …  led the league with a .404 batting average (61-for-151) … Had 466 OBP, stole 29 bases and recorded 12 doubles, all which ranked in the top four in the league … his 27 RBI led the team and tied for the ninth-most in the PGCBL … Had a base hit in 31 of his 44 games, with 21 multi-hit efforts … In his first five games of the summer went 13-for-18 with three extra base hits and six RBI in five games (June 6-15)

PERSONAL
• Born in Richmond, Va.
• Parents are Ren and Jen O’Ferrall
• Has two sisters, Lucy and Sam
• Has one brother, Henry
• Has yet to declare a major at UVA
• Recipient of the 2022-23 James F. McCabe-Blades Bicentennial Scholarship