CHARLOTTESVILLE –– Starting at 5 p.m. Saturday, they’ll gather in the parking lot outside Bryant Hall at the south end of Scott Stadium. For members of the Virginia Football Alumni Club, these pregame tailgates are an opportunity to catch up with old friends and to make new ones.

The club’s president is Kase Luzar, who lettered for UVA in 2000, ’01, ’02 and ’03. Luzar says he plays the role of “air traffic controller to make sure that we are moving in a coherent direction that gives us some good legs to stand on in the future.”

Like his fellow VFAC members, Luzar volunteers his time to the club. What’s kept him involved, he said, are “the relationships, the friendships, and the things that you went through with those guys that you know shaped you. Plenty of those things were very, very tough, which can be galvanizing, and I’ve heard Coach Mendenhall say when you do hard things together, it brings something out of you and establishes a connection.”

His football experience at UVA helped shape him, Luzar said, and it “affects the way I am as a spouse, as a parent, as a co-worker. I know that I’m not alone in these thoughts. These are the things that me and my buddies talk and text about, and I hear others above and below me say the same thing: that these relationships matter. We need to do whatever we can to nurture them, and in supporting each other, we’re going to be supporting the program as well, something that we care about, something that we know we gave a lot to but gave a lot back to us and shaped us.”

A graduate of Lafayette High School in Williamsburg, Luzar enrolled at UVA in 1999 and joined the football team, whose head coach was George Welsh, as a walk-on. Luzar’s brother, Chris, a 6-foot-7 tight end who later played in the NFL, preceded him on Grounds, and they were UVA teammates for three years.

Welsh retired after the 2000 season, and Al Groh succeeded him as head coach. Kase Luzar was awarded a scholarship early in the 2001 season and excelled in the Wahoos’ offense as an undersized tight end. Virginia finished 9-5 in 2002 and 8-5 in ’03, closing each season with a win in the Continental Tire Bowl. 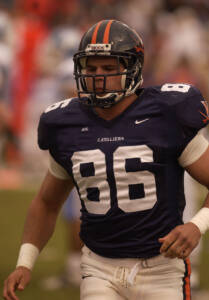 Save a nine-month stretch when he and his wife, Mary Elizabeth, lived in her hometown of Austin, Texas, Luzar has been a Charlottesville resident since earning his bachelor’s degree in Spanish from UVA in 2003.

Luzar, who has two master’s degrees from UVA’s School of Education and Human Developmen, is now vice president for information technology for Lightbulb Machine, a Charlottesville-based company. His wife, who has two degrees from the University, is director of student engagement for the UVA Alumni Association.

During Groh’s tenure as head coach, Luzar worked first as a graduate assistant and then as a recruiting assistant for the Hoos. He left Groh’s staff in March 2008 to start a business with two other former UVA players, Zac Yarbrough and David Fairbrothers, but never stopped supporting a program that underwent multiple changes in the years that followed.

Mike London succeeded Groh as head coach in December 2009. Mendenhall took over six years later, and he’s “very much putting actions to words in terms of building the football family and welcoming guys like me back,” Luzar said. 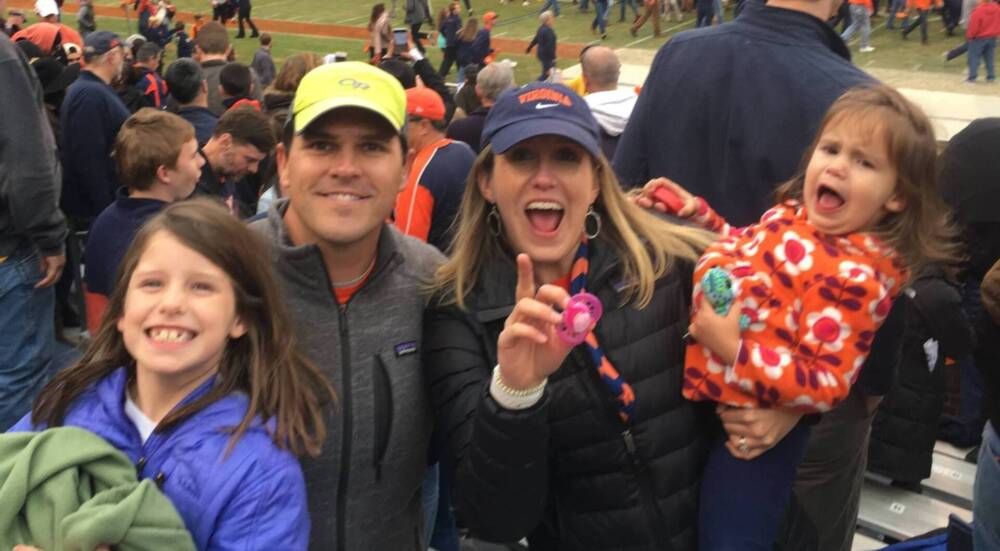 The Luzar family at Scott Stadium

Starting in 2019, Luzar said, the pregame tailgate became the focus of the club’s game-day activities. The COVID-19 pandemic put those gatherings on hold in 2020, but they returned this season at a prime location outside Bryant Hall, thanks to the Virginia Athletics Foundation.

“So in the very center of the tailgating thoroughfare, we have a home, we have a presence,” Luzar said. “We’re there with our flags flying, even as recruits walk by to go into Bryant Hall. And that’s because VAF has said, ‘You matter. Here’s two parking passes for you.’ ”

There have been other changes, Luzar said. Last winter, UVA athletics officials approached the club “and said, ‘We need to really put together an alumni engagement task force to figure out how we can do better with our largest alumni base. It’s significant. There’s a lot of guys a lot of good guys doing good things. How can we get them back around the program, physically or otherwise, to support each other and to support the team?’ ”

A series of Zoom calls and focus-group meetings followed, Luzar said, and former players were asked to weigh in on the football program. Did the alumni want more access to practice, more interaction with athletics director Carla Williams and Mendenhall, more professional networking?

Club officials compiled that feedback and presented it to Williams, Luzar said, and then started meeting every two weeks at the Dairy Market “to kind of analyze that information and say, ‘OK, if we take a layered approach, what are our most important priorities? Let’s name them and then let’s start to make some progress,’ because I think the level of support that we’re getting from different sides is unprecedented.”

Luzar is grateful for the support the club is receiving from Mendenhall and his program, the UVA athletics administration, and the VAF.

“It hasn’t been a fight,” Luzar said, “but we’ve got other people kind of pushing the boulder uphill with us now. There’s wind in our sails, and I’ve just been so impressed, having been in town for a while and been around the club for a while. The intention, the actions, the follow-through, and the alignment from all these different groups is something I’ve never experienced before.

“The iron’s never been hotter. We need to do our part to be a good teammate, to rally ourselves, to take action and follow through, so that we’re not missing this really important time that can kind of elevate our club, which can in turn help elevate the program and all the different things that Bronco and athletics want to do, by way of facilities and alumni engagement, etc.” 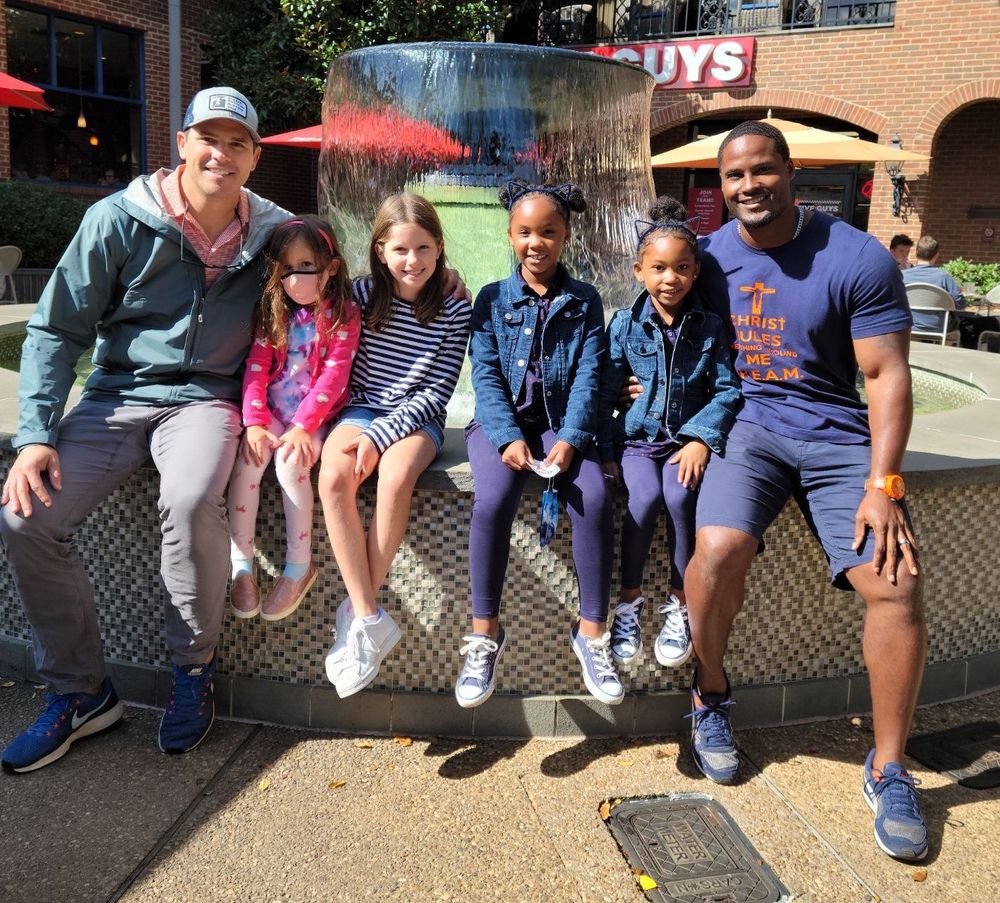 Luzar with Marquis Weeks (right) and their children

UVA’s football facilities are in dire need of upgrading, and Williams wants to change that. The department hopes to break ground on a new football operations center in the coming months.

“I think it’s absolutely critical to stay competitive,” Luzar said of the project. “I don’t think we’re embellishing or crying wolf when we say that we are lagging behind everybody in the conference in terms of facilities. When you’re coming from high school, anything is an upgrade from some dingy high school locker room. I wasn’t a guy who toured a lot of other schools, so the McCue Center always felt like a nice building, but then I see what’s happening in other places. Maybe Oregon and Texas are not a great comparison for us, but then you see what’s happening at Wake, Duke, Carolina, and [Virginia] Tech, and you say, ‘Jeez, I think we are getting left behind.’ ”

Luzar treasures his experience as a UVA football player. He didn’t exactly know what to expect when he joined the program, but he “always knew that I wasn’t just coming to get the free warm-up suit and sneakers,” Luzar said. “I wasn’t doing it as kind of a vanity or status thing. It’s something I’ve always done. It’s something I’ve gained a ton from. It’s something that’s taught me so much about people, relationships, competition, teamwork, perseverance, all of those things.”

“It was fun to go to bowl games and to win bowl games, to have other top-25 wins and road upsets,” Luzar said. “Those were great, but beating your rival on your home field in one of your last games, and for me with my fifth-year class that had started together and been through two coaches and seen our friends come and go and graduate or transfer, that was awesome.”

The day after the game, he and Mary Elizabeth got engaged. They have two children, daughters who were at Scott Stadium on Nov. 29, 2019, to see the Hoos defeat the Hokies for the first time since their father played. Chris Luzar and his family were up from Jacksonville, Fla., for the game, too.

The brothers took their children onto the field after the game to enjoy the celebration and take photos, “because these are the moments you cherish as a sports fan,” Kase Luzar said.

The Cavaliers have two more home games this season: Saturday night against Notre Dame and Nov. 27 against Virginia Tech. In the offseason, Luzar said, the Virginia Football Alumni Club hopes to continue extending its reach beyond Charlottesville.

“We want to be able to serve and support people wherever they are,” he said, “but particularly in the places where we have large pockets of alums: Charlotte, Atlanta, Richmond, D.C.”

Also, Luzar said, a “line that we’ve repeated a lot as we tried to build our club back up is that there’s a desire to be a good teammate, and part of that also means being a model that other [UVA] programs could emulate parts of. Without thinking that we’re on a pedestal, we understand the significance that a thriving football program can have on the rest of the athletic department and university. We want to do our part in that, and if [other programs] say, ‘Hey, we want to engage our alums a little bit better,’ it’s our intention that we can pull out the playbook and say, ‘Here’s what we did, here’s what we’ve done, here’s why we’ve done it. Take whatever is useful for you, because we’re playing for the same bigger team here.’ ”