Elliott Off and Running as Spring Ball Begins

CHARLOTTESVILLE – On the field next to the George Welsh Indoor Practice Facility, the free safety wearing a Hoos cap and a red pinnie looked a little older than his fellow defensive backs.

In this case, appearances were not deceiving. The “player” in question was 42-year-old Tony Elliott, and when tight end Joshua Rawlings caught a pass and raced toward the end zone, the University of Virginia’s new head football coach was among those in pursuit on Tuesday morning.

“Chase the ball!” That was Elliott’s message to the defense, and his point hit its targets.

To see Elliott throw himself so wholeheartedly into a drill “just lets you know your head coach is committed to what he’s doing,” cornerback Anthony Johnson said. “He’s definitely somebody who has great energy and he means everything that he says, and he brings it all every day at practice as well as in the meeting room. He’s going to give you his all in everything he does.”

Elliott, a former Clemson offensive coordinator, was hired on Dec. 10 to succeed Bronco Mendenhall as UVA’s head coach. His first practice with his new team was Tuesday morning. Much work remains to be done before spring ball concludes April 23 with the Blue-White Game at Scott Stadium, but Elliott was in good spirits after the Wahoos’ first practice.

“This was actually really, really fun,” Elliott said, “because yesterday was the first day I really got to dive into some football. Everything else has been program-related. A lot of things going on, trying to engage with donors, raise money. Organizationally, trying to get the support staff where I need it to be, just trying to get the culture rooted, getting the guys to understand, so I’ve been doing a lot more of the CEO-type activities.”

Not that he was complaining. “Every day I wake up, I have more and more confirmation that I made the right decision,” Elliott said, “and I’m really, really proud of the staff for the way that they’ve jumped in with two feet. The guys are eager, excited, they want to [play well]. It’s just our job as coaches to push them to the edge and teach them how to jump off and fly.”

His primary goal Tuesday, Elliott said, was to show his players what would be expected of them at practice. He moved from drill to drill and didn’t hesitate to speak up.

“It’s the little things, fellas,” Elliott told the offense at one point. “We don’t leave anything to chance. We win because we take care of the details.”

Elliott said instructed his assistants to “coach the details, coach the little things. The scheme will take care of itself. Obviously, we know there’s gonna be some transition on both sides of the ball, so I wasn’t really worried about the scheme today.”

Among those observing the proceedings Tuesday were such former Virginia players as Joey Blount, Chris Glaser, Jelani Woods, Nick Grant, Joe Bissinger, Joe Reed and Hayden Mitchell. Also on the sideline was Jay Woolfolk, who backed up Brennan Armstrong at quarterback last season. Woofolk, a freshman, is pitching for the UVA baseball this spring, but he plans to be around the football program as much as his schedule permits.

“I’m not used to getting up this early,” Woolfolk said, smiling.

UVA athletics director Carla Williams at practice, too, along with several of the coaches’ wives, including Tamika Elliott. The spectators saw a spirited practice conducted at a brisk pace. 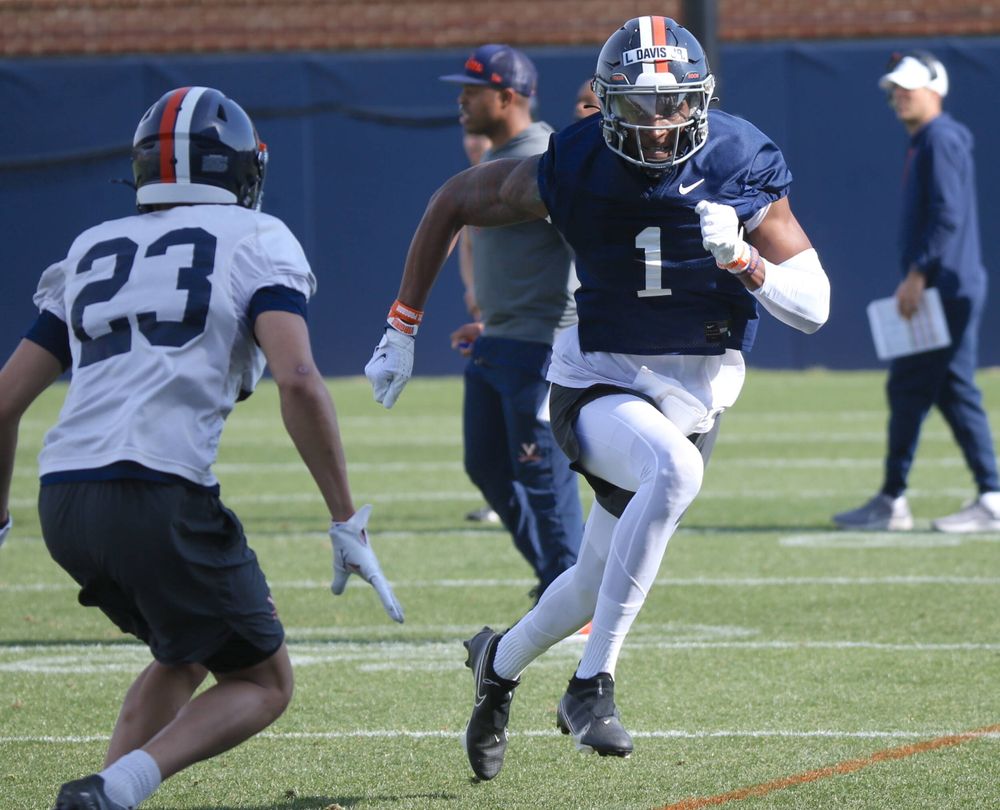 Elliott said he wants the Cavaliers to be “playing from a place of joy and passion, loving what they’re doing, understanding that, man, it’s gonna be hard, it’s gonna be challenging, coaches are going to get after you, it’s gonna be intense, your body’s gonna be hurting, you’re gonna feel fatigue, but just finding a way to have joy, getting back to the love of the game, like you were a kid. So a lot of energy. Trying to have controlled energy. You don’t want guys to be out of control. I want the coaches to coach. I don’t want them just to holler. I want them to teach.”

“It starts with good people,” Elliott said. “I’ve got really, really good people on my staff, and they align with what my vision is for this program about being student-athlete-focused in a holistic development. And it’s been fun. It seems like we’ve been together for a while now. Today was the first day on the field, so there’ll be some things for us to tweak, and I told the players, ‘I’ve got accountability too. I’ve got to do better. I’ve got to get better as a head coach from the first practice, so I’m calling y’all out, but I’m calling myself out too, or my coaches are gonna call me out.’ ”

From a team that finished 6-6 in 2021, Virginia returns an elite quarterback in Armstrong, who shattered several program records in 2021. Elliott wants No. 5––yes, there were numbers on the jerseys Tuesday––to continue growing as a leader.

“He’s the field general,” Elliott said, “and when you see the troops need a shot of energy, you provide it. Obviously, he’s got a ton of confidence in his ability. He can make every throw. We know what kind of player he is. Now he has a chance to use all aspects of leadership, and that’s the area where I’m gonna have to challenge him from that standpoint, but he’s been awesome. He’s like a pro. He doesn’t have [many] classes left to finish up, so he gets to come over and watch a lot of film, so it’s been really, really cool to see him and Coach Lamb and Coach Des starting to gel together.”

Elliott has challenged all of the players, Armstrong said. “You can always do more. I feel like I’ve done a good job, and he’s just challenging me even more. I don’t know what that looks like. I just know I gotta challenge myself to uphold what he wants me to do. I’m just going to be myself and continue to try to lead this team the way I do.”

The Cavaliers had the ACC’s best passing offense last season, and with wideouts like Keytaon Thompson, Lavel Davis Jr., Billy Kemp IV, Dontayvion Wicks and Malachi Fields back, that figures to be a strength again this year. But Kitchings and Ellliott want a more balanced offense, and Armstrong is enjoying the process of mastering a new system.

“I’m getting a lot different work with certain things I’m trying to get better at,” Armstrong said. “It’s been good. It’s pretty fun coming in each day to keep learning.” 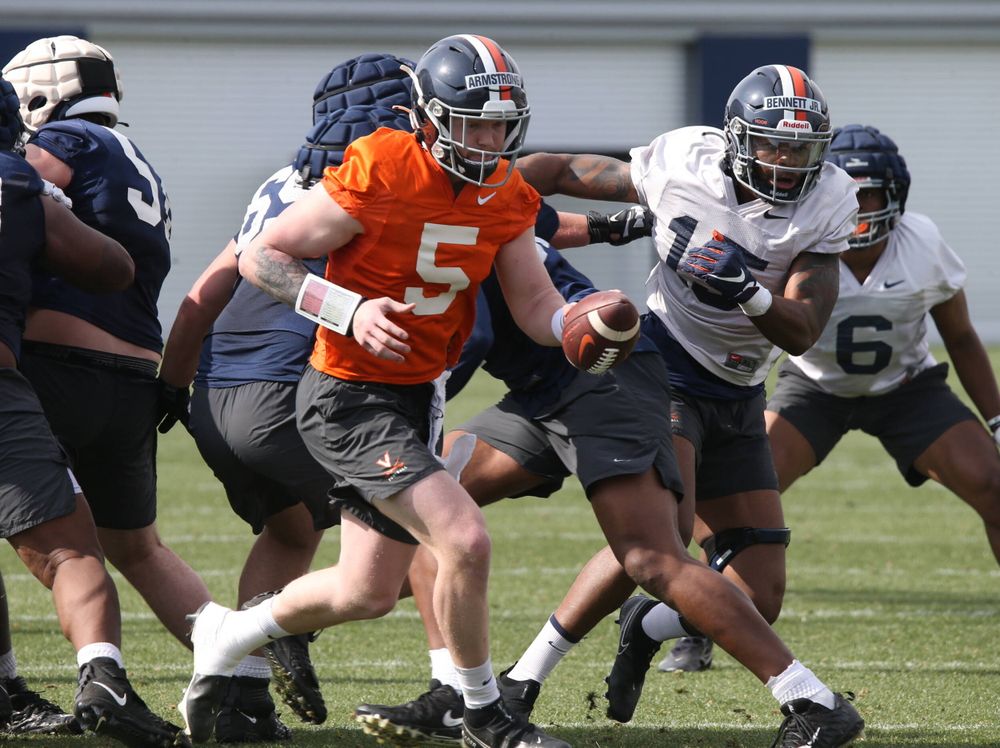 Among his priorities this spring, Elliott said, is creating “some competitive depth at all positions, with obviously the offensive line being the focal point.”

Virginia lost its top six offensive linemen from 2021, “and a lot of the guys that are coming to help us are not here yet,” Elliott said. “So we’ve got to develop what we’ve got, just some consistency with everything that we do. And the biggest thing for me is just how we practice, because the guys have got to understand that we have to practice in such a way that the games become easy, and because it’s so competitive and it’s so fast, we get our conditioning done while we practice.”

The one position at which the Cavaliers have both experience and depth is wideout.

“Very talented,” Elliott said of the group. “Got size, got speed. Got everything that you need when you’re building a complete receiver room. I’m really gonna challenge those guys. Those guys will tell you, once you get a chance to talk to them, Coach Elliott is on us, because it’s such a technical position and confidence is everything. So the way that you practice, your fundamentals, your technique, all of those things are important. And it’s a different scheme than what they’re used to. So they’ve got to challenge themselves. We’ve got everything we need at wideout; we’ve just got to get those guys to lead because right now that’s the most talented group that we have.”

Among FBS players who averaged at least two receptions per game, Davis ranked second nationally in yards per catch (25.8) that season, and he was expected to be a focal point of the offense as a sophomore. During the Cavaliers’ first spring practice last year, however, he tore the anterior cruciate ligament in his right knee, an injury that caused him to miss the 2021 season.

Healthy again, Davis approached the first practice with some trepidation.

“I was real nervous,” he said. “It felt like I was playing football for the first time, but once I got into it, the jitters left, and I started playing and reacting and being the same old person. It felt great. All I could do is thank God for everything, for blessing me to play the game again.”

During his 11 years on head coach Dabo Swinney’s staff at Clemson, Elliott worked on the offensive side of the ball, and he found himself gravitating toward that group Tuesday.

“I think I coached every offensive position today,” he said, “but the defense, they were rocking and rolling. I thought that they had a better day.”

Defensive linemen Olasunkonmi Agunloye and Ben Smiley III were among those who impressed Elliott. UVA’s offensive players, meanwhile, were “lethargic a little bit and kind of resting on past success,” he said.

“They gotta realize, and I’ve got to get them to fully understand, you can’t read anything about yourself. Last year’s touchdowns, yards, none of that stuff is carrying over. So it’s a great opportunity to teach and lead. I think that the practice was a little bit faster than maybe what they might have anticipated. So some of them got a little bit winded, which is good because now you get to see how much mental toughness that they have. Are they going to push? Are they gonna strain? And there’s a great opportunity from this practice to challenge some guys, especially guys we expect to lead.”