CHARLOTTESVILLE — At the end of practice Thursday morning, with his players gathered around him, University of Virginia head football coach Tony Elliott briefed them on several topics, the last of which was the Blue-White Game.

“Let’s go put on a show,” Elliott told his team.

UVA’s first season under Elliott will officially start Sept. 3, when the Cavaliers host the Richmond Spiders at Scott Stadium. Between now and then, about 20 incoming freshmen and graduate transfers will join Virginia’s program, and so the team that takes the field in September will look different than the one that’s been practicing this spring. Still, fans have a great opportunity Saturday at Scott Stadium to get a look at what Elliott and his staff are building.

At 4 p.m., the Wahoos will conclude their first spring under Elliott with the Blue-White Game. The players have numbers on their jerseys, so it’ll be easy for spectators to know who’s who during this intrasquad scrimmage.

That’s one of the many changes Elliott has implemented since taking over for Bronco Mendenhall in December. Another is the return of the Wahoo Walk. At about 2:45 p.m. Saturday, the buses carrying the team will arrive at the southeast corner of Scott Stadium, off Whitehead Road, and fans are encouraged to be there to welcome the Hoos.

“The seniors asked for it, Coach Elliott heard them, and he put it into motion,” said associate head Marques Hagans. “It’s just giving fans, friends and families the opportunity to see the guys before they prepare to go into battle. Hopefully it will be a big part of our home game routine for years to come.”

In attendance at each of the team’s first 14 practices this spring were a variety of guests, including former UVA players, family members, high school players and coaches, and athletics department staffers. The atmosphere Saturday, though, will be different, and Elliott said he’s eager to see how his players “function in that environment. So it’ll give me an indication of [whether they can] transition the fundamentals and the coaching and the scheme work to a competitive situation.”

Elliott came to UVA from Clemson, where he spent 11 years on head coach Dabo Swinney’s staff. The spring game at Clemson annually draws a big crowd, and Elliott wants the event to become a big deal at Virginia too.

“This is an opportunity to create a game-like environment for [the players],” Elliott said. “It’s a big deal to me to have a good crowd, create the energy, because the game is different than a practice. You’re trying to stress them as much as you can in practice to make the game easier, but then when you get to the game you have those added elements, and you want to see which guys can maintain the focus and not get distracted by what’s going on in the game.”

The defense regularly got the better of the offense in many of the early practices, in part because the Cavaliers have few healthy offensive linemen. As the spring went on, however, the offense “made some progress,” Elliott said.

“They’ve kind of settled in. We’ve had a little more consistency with the personnel in practice, offensively, with the exception of the offensive line. And again, for the offense, there’s more details. Defensively, you kind of get those guys lined up and you coach ‘em up a little bit on technique and then you say, ‘Go get the ball.’ So a lot of what they do is based off of energy, emotion and passion. Whereas offensive football, it’s all 11 at the same time with a lot of details.”

Kitchings has asked a lot of the offensive players, Elliott said, “but I thought they did a good job the second half of spring of really responding, and I also thought the defense did a good job with keeping up their energy. I wanted to see how they were going to respond. If they were going to be able to maintain that excitement, that energy, day in, day out, and they’ve done a good job.”

With so few offensive linemen available—tackles Jonathan Leech and Charlie Patterson, out of necessity, will play for both teams Saturday—the team probably “didn’t get as much live work as I wanted,” Elliott said, “but we did get some good, competitive stuff, enough to evaluate. The biggest thing for me, as I’ve said before, is the big-picture things: really establishing the core values and the practice habits and the fundamentals, the tempo at which we practice, the organization, the structure. Those are the things that were most important to me. Schematically, I let Des and I let Rudz do what they needed to do. I was just focusing more big picture.” 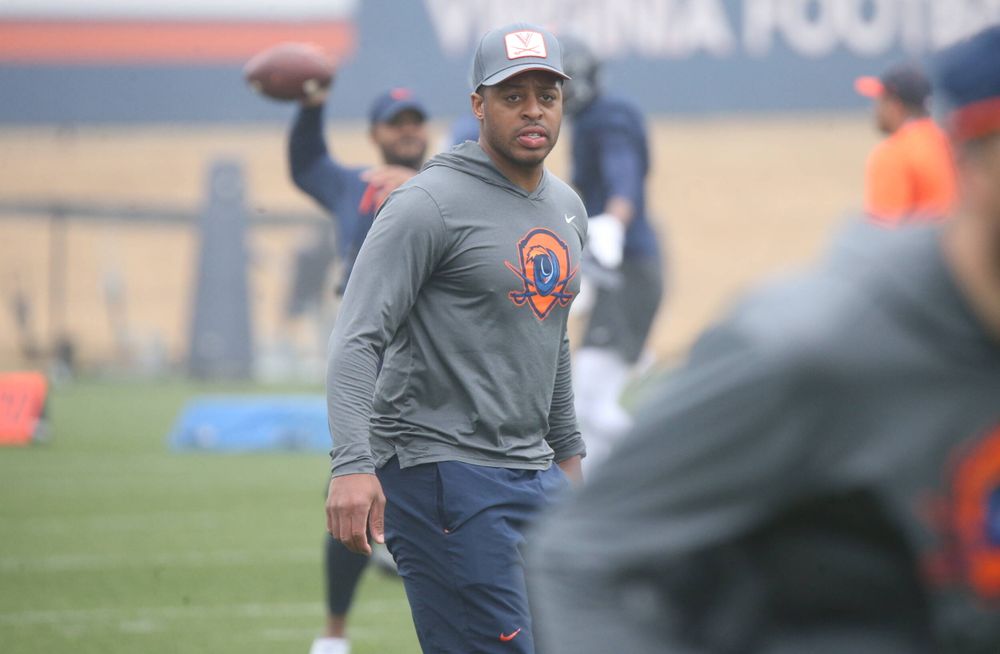 Also, Jay Woolfolk, who backed up starting quarterback Brennan Armstrong last season, is pitching for the UVA baseball team this spring and won’t be at the Blue-White Game. Virginia hosts North Carolina in an ACC baseball game at Disharoon Park on Saturday afternoon.

Since coming to Charlottesville, Elliott has had an open-door policy for former UVA players, and many of them have stopped by practice or the McCue Center to talk with the staff. Elliott’s assistants include three former UVA greats: Hagans, Sintim and Chris Slade.

“How cool is it that I get to see Heath Miller and Aaron Brooks and Chris Long, guys that were a little bit before me or around my time that went on and played?” said Elliott, a former Clemson wide receiver.

“To see them come back and just the passion and the energy and the love that they have for this place [has been great], and I think for us to get to where we want to go as a program, we’ve got to be connected,” Elliott said. “That’s one of my objectives. I’ve talked about: How do I want people to describe this program? I want us to be a program that acts. First, we’re authentic, we’re connected, we’re transparent and we’re about service. And that connectivity that I’m talking about is being connected to the past, because I think these young men that wear the V-Sabre right now, they need to understand the responsibility that they have to perform to a certain standard based off the guys that came before them. And the connection between those two groups propels you into the future, and helps us in recruiting, because now we can identify the type of young men that need to come in and carry the legacy forward.”

Elliott plans to talk to former players Friday night and Saturday afternoon, “and my message to them has been really simple: This isn’t Tony Elliott’s program. This is Virginia football, and Virginia football encompasses everybody … We’re all in this thing together, and the former players are a huge piece of that. Just like the Fourth Side, the fans. That’s why we’re doing the Wahoo Walk. I wanted to bring the Wahoo Walk back to engage the fans, because they’re a big piece of it. The energy that they create in the stadium, the players and the coaches, they feed off of that.”

The Blue-White Game will air on ACC Network. In Armstrong, the Cavaliers have one of the nation’s top quarterbacks, and he’ll take snaps with both teams, which makes it challenging to predict how the game will unfold.

Hagans is head coach of the Blue team, and Slade is in charge of the White team.

“I guarantee you that the Hoos will win,” Hagans said, laughing. “But, really, I’m just encouraging and asking everyone within Charlottesville, Roanoke, Lynchburg, Richmond, the 7-5-7, Northern Virginia, everybody in the state of Virginia who doesn’t have anything to do this Saturday to come out and support the Hoos. It should be a great day, some good festivities and is just the culmination of hard work during spring ball … The guys have really worked hard, and I think it would be cool for them to have a good environment, to put an exclamation point on the hard work they put in during spring ball.” 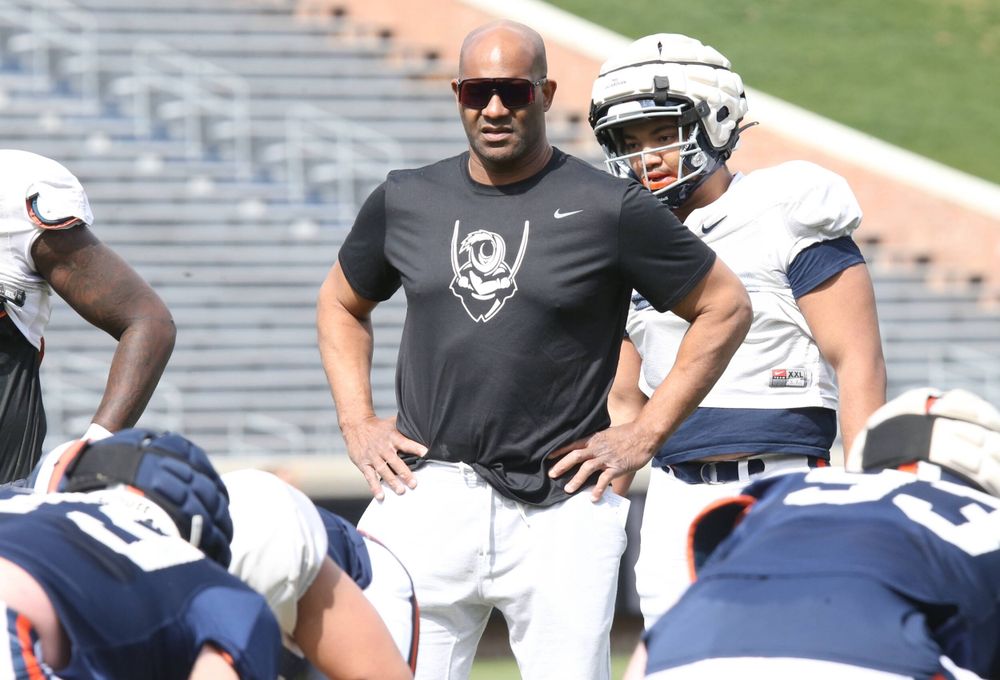