“I think he’s a guy that’s probably the most versatile of all the D-linemen,” Tony Elliott told reporters at Scott Stadium.

“He’s strong enough, physical enough to go inside and be like a Jonathan Allen,” said Elliott, who as Clemson’s co-offensive coordinator had to scheme against the All-American defensive lineman from Alabama. “Not saying he’s Jonathan Allen … [but] he’s got that kind of flexibility and versatility.”

Smiley is “one of those guys you can move around all across the D-line,” defensive tackle Jahmeer Carter said.

Big things were expected of Smiley when he enrolled at UVA in 2019. He was a heralded recruit from Indian River High School in Chesapeake who’d also been offered scholarships by such schools as Clemson, Oklahoma and Alabama. For various reasons, though, he’s yet to earn a significant role at UVA.

In 2019, an asthma attack sent Smiley to the hospital and limited him to two games. In 2020, a season played under strict COVID-19 protocols, Smiley again appeared in only two games. This time it was a knee injury that set him back.

Last season went better for Smiley. He played in eight games, three of which he started, and recorded seven tackles and three quarterback hurries. But he’s capable of much more, and the Cavaliers hope his long-awaited breakthrough comes this year.

The signs are encouraging. An unexpected coaching change followed the 2021 season, with Elliott taking over for Bronco Mendenhall, and Smiley is blossoming under the new staff.

“As people, as soon as they stepped on Grounds, they made themselves feel like family to me,” Smiley said. “On the field, as far as play-calling and stuff, it took me quite a while to adjust to their schemes and their new ways, but after I got that down, I was able to be productive.”

In a one-on-one meeting with Elliott before the start of spring practice, Smiley said, “I just talked to him about my expectations for myself, and he gave me his expectations for me. I basically told him, ‘I want this year to be the year for me. I’ve been hurt. I haven’t been making any big-time plays. I haven’t been a leader.’ And I told him, ‘I’m putting my full foot on the gas as far as working out, eating better, taking care of my academics and everything like that.’

“So I basically carved out this path for myself, because I was just tired of being sick and tired. I feel like I’m tired of just sitting around, so it’s time for me to ramp it up a little bit for this program.” 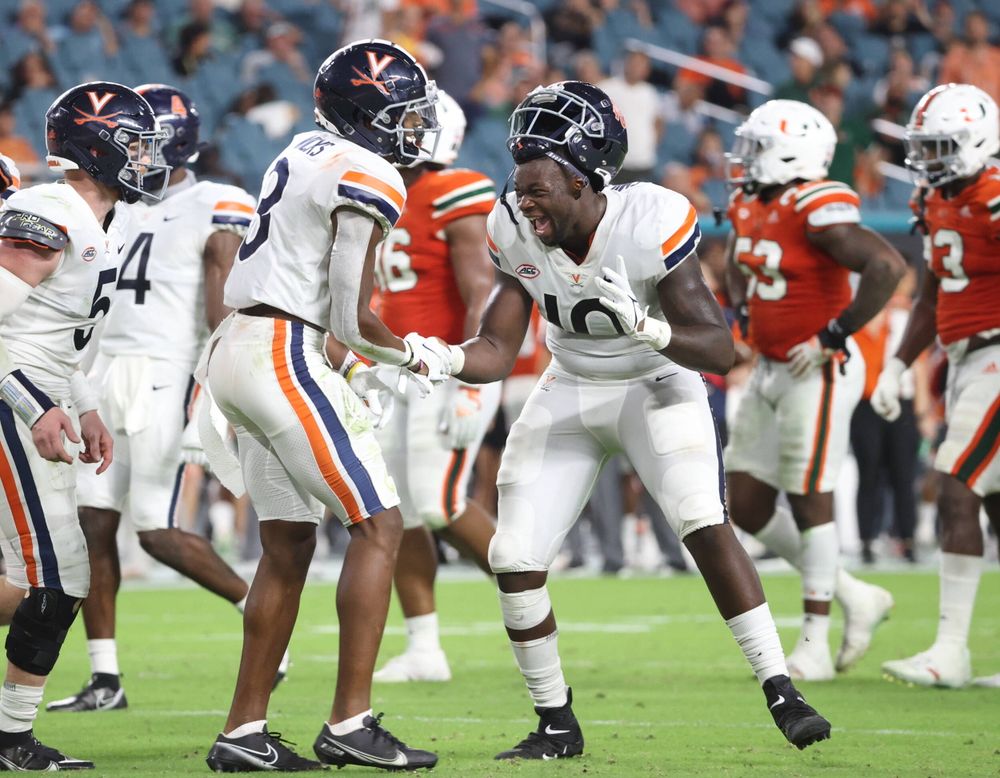 Smiley’s position coach is former UVA great Chris Slade, who still holds the ACC record for career sacks (40). Growing up in Chesapeake, Smiley said, he heard his father and his grandfather talk about the exploits of Slade, who’d starred at Tabb High, another school in Tidewater. Not until Smiley arrived at UVA, however, did he fully appreciate what a towering figure Slade remains in the football program.

Slade, for his part, doesn’t hesitate to remind his charges of his feats as a Cavalier.

“He says little smart things like, ‘That’s why I had 10 sacks a season,’ stuff like that,” Smiley said, smiling. “Just words of encouragement, just basically letting us know he still is that guy.”

Slade, who has played in the NFL for about a decade, has formed a strong bond with Smiley.

“I don’t like to use the term ‘favorite players,’ but he’s one of the guys I’ve really enjoyed coaching so far,” said Slade, who works with the Wahoos’ defensive ends. “He takes a lot of pride in doing the right things. He wants to do the right things. Sometimes he doesn’t know how, and that’s what I get paid to do.”

Smiley is “an aggressive, physical kid. He has probably the most upside and most potential out of all the D-linemen,” Slade said. “Not saying he’s best player or the best D-lineman, but he has the most potential to be the most dominant. He’s very explosive, and he’s strong at the point [of attack]. Now, he might line up in the wrong place, but he’s pretty disruptive when he’s doing the right things.”

Like several of his teammates, Smiley initially didn’t embrace the changes Elliott made to the program.

“He’s another one that was a guy that was kind of ‘one foot in,’ ” Elliott said.

As the spring progressed, however, Smiley became a disruptive force on the line. “So I’m definitely proud of Smiley,” Elliott said. “He was one that I challenged, and he had to make a decision.”

Elliott said he told Smiley, “ ‘You’re either fully committed, or you’re not gonna make it, because it’s gonna be too hard. I’m not gonna relent, because you’re got too much ability, you’ve got too much potential. And I want to pull it out of you. But you can’t resist. You’ve got to trust the process.’ And once he started trusting the process, everything about him improved.”

Slade said Smiley “has made some big improvements on his game. I always preach to the kids, ‘Let’s become good technicians.’ And so he’s really working on his technique and his hands. His hand placement has gotten better.”

Each week we'll recognize our student athletes for their academic achievements in the classroom.

Smiley, who wears jersey No. 10, has had three position coaches at UVA: Vic So’to, who was his lead recruiter, in 2019; Clint Sintim in 2020 and ’21; and, now, Slade. Sintim, who now coaches the Cavaliers’ linebackers, briefed Slade on Virginia’s returning defensive linemen after the new staff was in place.

“He did give me the skinny on a lot of those guys, and then I wanted to form my own opinions as well,” Slade said. “But Clint’s been good along the way. He’s given me tips and clues on the temperature of some of the kids, particularly Smiley. Clint actually said that he thought Smiley was playing as well now as he’s ever played. So I think that’s a tribute to his hard work.”

Smiley, who lived this year with teammates Jonathan Horton and Dontayvion Wicks, also has become more diligent about treating his asthma.

“He’s definitely managing it much better and more maturely than he used to,” said Kelli Pugh, UVA’s associate athletics director for sports medicine.

Smiley uses “a preventative medicine that he takes every day, and then he uses the rescue inhaler before exercise,” Pugh said. “But when he’s not sick, when he’s on his meds, it doesn’t really inhibit his ability to exercise.”

As a true freshman in 2019, Smiley recalled, he didn’t always take his medicine as prescribed, and “it kind of caught up to me, and that’s what set me back a lot.”

He spent several days in the intensive care unit at the UVA Medical Center that fall, Smiley said. “All of the coaches came to see me. Coach Mendenhall was by my side, by my family’s side.” 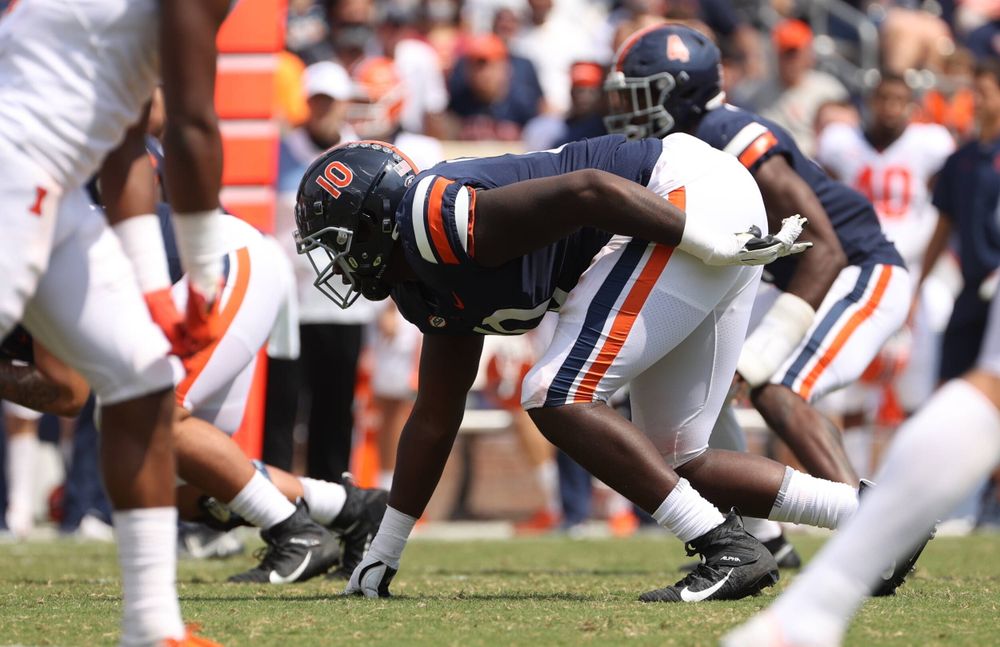 The pandemic hit the United States in March 2020, and Smiley decided to opt out that fall and take online classes from home in Chesapeake.

“Coming off my first year with my asthma and stuff like that, my doctors were telling me if I caught COVID, it could be 10 times worse for me,” Smiley said. “And my family really [worried about] that, especially after me being in ICU. They thought it would be good for me just to take a year off and get my asthma together and then go once the pandemic calmed down a little. But I just didn’t feel right without playing football. I felt like I was healthy enough to get back on the field. I felt like I’d worked hard enough, and I wanted to go back. I begged my mom to go back to football, and I came back after fall camp.”

In UVA’s second game that year, Smiley suffered a knee injury that effectively ended his season. It didn’t help that he weighed close to 300 pounds, about 50 more than when he enrolled at UVA in 2019.

Smiley said his doctors told him the extra weight contributed to his medial collateral ligament tear, with “my body not being used to it and then me planting off the ground. I basically did it myself. Nobody touched me. As I soon as I came off the ball, I felt it and I just went down.”

He’s at a much healthier weight now, and he’s thriving under new strength and conditioning coach Adam Smotherman.

“Each and every week on my bench, my squat, my dead lift, my power clean, it’s like I’m adding five or 10 pounds,” Smiley said. “Each and every week it feels easier, I feel stronger, and I feel like what they teach us in the weight room translated to the field for me.”

Smiley, who’s majoring in American studies, hasn’t had the college career he envisioned when he signed with Virginia. But he has three seasons of eligibility remaining, and the positive feedback he’s received this spring has put in a positive frame of mind as the start of the Hoos’ summer strength and conditioning program nears.

“My first and second year, battling injuries, it really takes a toll on your mental health and makes you question a lot of things,” Smiley said. “So I was really in a dark space. This year I feel like I’m giving 100 percent, and if I fail, I fail.”

Virginia and Tennessee to Open 2023 Season in Nashville
Football

Virginia and Tennessee to Open 2023 Season in Nashville