CHARLOTTESVILLE — On his phone, Daniel Sparks has saved a video that reminds him how far he’s come in football. It was recorded the summer before his senior year of high school, and it shows his first real attempt at a punt.

He played soccer growing up in Gadsden, Ala., which is about 65 miles northeast of Birmingham, but Sparks never seriously tried punting until 2019, when he began working with Mike McCabe of One On One Kicking.

“He basically taught me how to play,” Sparks said, “so I give him all the credit.”

The 6-foot-6 Sparks, who kicks right-footed, has had a peripatetic football career. Since graduating from Gadsden City High in 2020, he’s attended three universities: Louisiana Monroe, Minnesota and, now, Virginia. He transferred to UVA this summer and joined head coach Tony Elliott’s program as a preferred walk-on.

“We call him Sparky,” Elliott told reporters Tuesday. “If you have a nickname, you’re doing pretty good.”

Jacob Finn, a graduate transfer from the University of Florida who punted for the Wahoos in 2021, was out of eligibility at season’s end. With only one punter on the roster during spring practice—Brendan Farrell, who’s more accomplished as a kicker—UVA went looking in the transfer portal. Drew Meyer, a former All-Big Ten punter at Wisconsin who’s now the Cavaliers’ analyst for special teams, led the search.

Sparks didn’t become an option until late in the spring. He went through spring practice with the Golden Gophers, but wasn’t able to supplant Mark Crawford as the starting punter. The prospect of backing up Crawford for a second straight season didn’t appeal to Sparks, and so he entered the portal. Virginia immediately took note.

“Daniel was an extremely intriguing young man,” Meyer said, “and obviously, with his height and his flexibility, he’s got some gifts that you can’t teach. And he’s a great kid, the product of a great home. He’s just a pleasure to be around every day.”

The Cavaliers had been evaluating other punters in the portal, Elliott said, but Sparks, who has multiple years of eligibility remaining, stood out.

“We felt like he was the best fit,” Elliott said. “We knew there was some ability there; it just needed to be developed.”

After visiting UVA, Sparks committed in June, and he arrived on Grounds for the third session of summer school in July. He’s living with tailback Cody Brown and long-snappers Lee Dudley and Aidan Livingston this year. 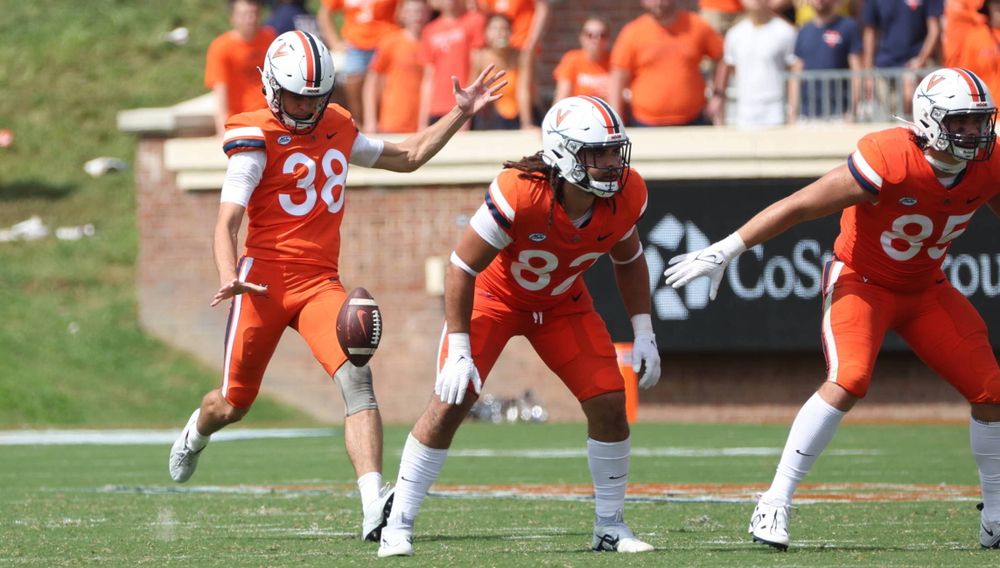 At ULM, Sparks won the starting job as a freshman and averaged 44.6 yards per punt. The Warhawks finished 0-10 that season, however, and a coaching change followed

“I wasn’t really sure if I wanted to stick around,” Sparks recalled, and so he entered the transfer portal. Minnesota offered him a spot on its roster, and he wanted to challenge himself in a Power Five program.

Sparks enrolled at Minnesota in January 2021 and battled Crawford for the starting job that spring. Crawford, who’s from Australia, prevailed.

“I understood,” Sparks said, “because he was a really, really solid punter. So I just ended up losing that competition.”

He did not get in any games the Golden Gophers last season, but Sparks said he left Minneapolis a better punter.

“One hundred percent,” he said, “because they put me in different situations there that helped me acclimate to what it felt like to be in a pressure situation at that Power Five level.”

Meyer said Sparks “started to really figure it out [last fall] and started to hit some good balls and had some great practice film. From the first or second clip on his cut-up that he sent us, you could see what he was capable of.”

Sparks made his UVA debut Sept. 3 in a 34-17 win over Richmond at Scott Stadium, where he averaged 48.7 yards on his three punts. But he missed the second half of the Cavaliers’ second game, a 24-3 loss at Illinois, after suffering a concussion late in the second quarter.

“I went down in coverage a little bit and the lead blocker just hit me in the side of the head just right,” Sparks said. “The good thing is, it was very, very, very mild.”

He returned for Virginia’s third game, a 16-14 win over Old Dominion, and then averaged 48 yards on his four punts against Syracuse last weekend.

“So far, man, he’s been a weapon for us,” Elliott said “He’s kicking the ball well.  He’s got to improve on some of the locations with the ball, but for the most part he’s doing a good job.”

Meyer said: “For high school guys making the jump to college, hang time is the biggest change. In high school, you’re typically trying to drive the ball, because the returns aren’t as good. In college, you’ve got to have hang time to let your guys get down the field and cover, but then directional [punting] is the other aspect. We’ve given up a couple of returns this year, and most of those have been where the ball has gotten in the middle of the field … We’re just trying to make sure we’re hitting our landmarks from that standpoint.”

UVA’s academic reputation was another selling point for Sparks when he went looking for another school. He’s pursuing a bachelor of arts degree in biology at the University. His father, Dan, is an orthopedic surgeon, and Sparks entered college in 2020 figuring he’d attend medical school, too. Then he met chemistry class.

“That was not fun, so I did not do that,” Sparks said, laughing. “Now my plan is to do physical therapy.”

He’s looking forward to a long career as a Cavalier. “I’m sick of moving,” Sparks said. “When people talk about the transfer portal, they don’t realize how stressful it is to try to find a new place.”

Now that he’s found a home, Sparks hopes to one day to earn a scholarship at UVA. “There’s definitely an opportunity,” Meyer said, and Sparks knew that when he chose Virginia.

“That’s always been a dream of mine,” he said, “because I’ve never been on scholarship anywhere.”