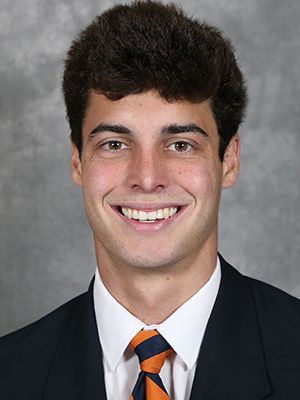 AT VIRGINIA:
2022: One of five team captains voted on by the players at the end of the season … appeared in all 10 games … matched the UVA single-season punting average record, led the ACC and finished eighth in the country with a 45.9 yards per kick … punted eight times for 409 yards against Pitt (Nov. 12) including a season-long, 63-yarder. Had three 60+ yard punts in the contest, the first UVA punter ever with three 60-yarders in a game.

PRIOR TO VIRGINIA: Played in all ten games at the University of Louisiana-Monroe during the 2020 season as a freshman … punted 30 times and averaged 44.6 yards per punt, landing five inside the 20-yard line … average was second-best in the Sun Belt Conference … kicked off 33 times, averaged 55.3 yards on kickoffs and recorded six touchbacks … transferred to the University of Minnesota in January of 2021 as a sophomore and did not see game action during the 2021 season.

HIGH SCHOOL: Graduate of Gadsden City High School in Gadsden, Alabama … went 6-of-8 on field goals and 19-of-20 on extra points … had a 46-yard average on punts and 12 touchbacks on kickoffs in 2019 as a senior … chosen as AJSTS 2019 Special Teams Player of the Year … member of the 2019 All-Messenger football team at punter … also was a standout soccer player, making the All-Etowah County team after finishing the shortened 2020 season as the team leader in goals scored … coached by Ali Smith.