CHARLOTTESVILLE — University of Virginia head coach Tony Elliott expects his players to stay composed on the football field, and at times they’ve struggled to do so this season. Elliott needs to do better in that regard, too, he acknowledged Tuesday afternoon.

Since rallying to edge Old Dominion 16-14 at Scott Stadium on Sept. 17, the Cavaliers have lost back-to-back ACC games, both on the road. They fell 22-20 at Syracuse and 38-17 at Duke, which had lost seven straight in the series. At times in each game, Elliott’s emotions boiled over on the sideline.

As Virginia (2-3, 0-2) heads into its homecomings game with Louisville (2-3, 0-3) at Scott Stadium, the “biggest challenge is for me to keep my composure,” Elliott said reporters at John Paul Jones Arena.

In his first season as a head coach, the former Clemson assistant said he’s trying to find “the right way to communicate to these guys to get them to believe and to buy in. I was a little bit embarrassed with my reaction to a couple things during the [Duke] game, just because I lost my composure a little bit.

“I apologized to the staff and to the players. But I saw things that from a cultural standpoint I just did not like. That’s not going to be who we are as a program. I just believe that my job at that time is to try and address those things. Sometimes frustration can get the better of anybody, but there’s a commitment to making sure that the core values of this program [are] what we lean on to be able to win and what we display and what we represent when we go out there.”

In a game to air on ACC Network, the Wahoos host the Cardinals at noon Saturday.

Louisville’s leader is senior Malik Cunningham, a quarterback who has 4,132 career yards rushing and 9,043 career yards passing. Cunningham missed the end of Louisville’s loss at Boston College last weekend after taking a blow to the head, and his status for this weekend is uncertain.

“You’ve still got to prepare as if their guy is going to be the guy,” Elliott said. “It’s going to be a game-time decision. Be ready to adjust.”

Cunningham’s backup, Brock Domann, has completed 6 of 16 passes this season for 92 yards, with one interception.

Like the Hoos, the Cardinals are not having the success they wanted this fall.

REUNION: UVA cornerback Anthony Johnson began his college career at Louisville and still has many friends in that program, including Cunningham and offensive lineman Caleb Chandler.

“Malik Cunningham is my guy,” Johnson said Tuesday. “We talk all the time, trash talk … There’s a lot of guys in that team that I came in with as freshmen that I still have really good connections with.”

Asked about the challenge of defending Cunningham, Johnson said: “He’s just a dynamic player. Yougotta get him on the ground. He does a great job of extending plays. He just does a good job with his legs, and he does of good job of just making sure to look downfield and get open receivers.”

SIGNS OF PROGRESS: As has been well-chronicled, the Hoos lost their top six offensive linemen from 2021. The current O-line struggled early in the season, especially in a 24-3 loss at Illinois, but has slowly improved as it’s gained more experience.

“The guys up front, they’re working their tails off,” Elliott said. “You’ve got five guys that are trying to gel together.”

Those guys include offensive guard Derek Devine, a fifth-year senior who’d played little before this season.

“I think we are progressing,” Devine said Tuesday. “That’s our goal coming into practice. Each week we have to get better. We come in trying to work on something new and get better as a unit.”

Duke defenders batted down about a half-dozen Armstrong passes last weekend at Wallace Wade Stadium, and that’s “a teachable moment for the offensive line,” Elliott said.

The O-line needs to “stay engaged,” he said. “[Defensive players] are trying to get their hands up in the throwing lanes. If you stay engaged, their hands stay down, now we get the ball throw over those guys.” 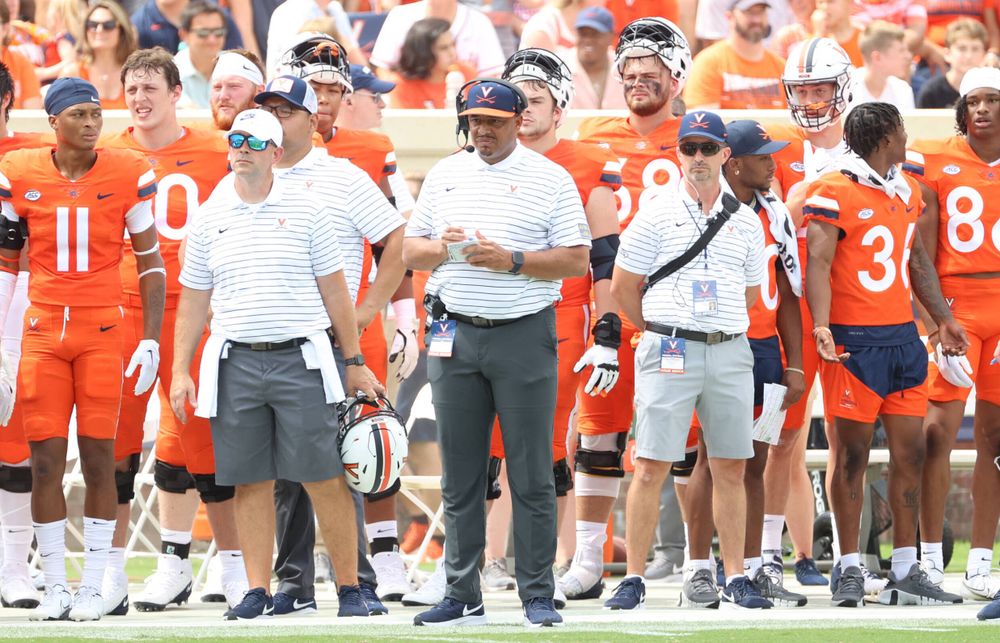 EXPANDED ROLE: The Cavaliers used Grant Misch primarily as a blocker in 2020, when their featured tight end was Tony Poljan (38 receptions for 411 yards and six TDs), and in 2021, when Jelani Woods caught 44 passes for 598 yards and eight TDs.

With Woods now playing for the NFL’s Colts, UVA quarterback Brennan Armstrong is targeting No. 85 more this season. The 6-foot-6, 247-pound Misch has 11 receptions for 89 yards this year.

“I’m just running a lot more routes,” said Misch, who’s in his fifth season at UVA. “The past couple years, I haven’t run many routes. So I’m just getting the opportunity, and Brennan’s finding me. It’s been nice.”

Misch came into this season with five career receptions, the most memorable of which was the 1-yard touchdown pass he caught from Armstrong with 22 seconds left against Louisville last year. The Cavaliers, who trailed by 17 after three quarters, rallied to stun the Cards 34-33.

At the start of the fourth quarter, Misch recalled Tuesday, the Hoos “were on the sideline and Brennan kind of gathered a bunch of us up and said, ‘Hey, we’re not going to quit,’ and things went our way and came out with us on top.”

UNFAMILIAR TERRITORY: This marks the first time since 2011, his first season as a Clemson assistant, that Elliott has experienced back-to-back losses as part of a coaching staff. He’s in his first year at UVA, which finished 5-5 in 2020 and 6-6 in 2021.

“Hold true to your core values, continue to look for small signs of improvement,” Elliott said. “I’ve seen those. Obviously disappointed with our inability to figure out a way to win at this point.  Still encouraged. I’m building a program. That’s one of the things that I’m trying to get these guys to understand. There’s a difference between having a good team and building a program. Good teams, they may be good for one year. Good programs, they sustain success over the long haul.

“In order to build a program, there’s philosophies, processes, the way that you operate, core values that you have to truly, truly instill. A lot [taking care of a] bamboo tree. You might not see immediate result, but you’ve got to keep watering, believing and trusting that at one point it’s going to click and you’re going to see the growth.”

With penalties and untimely mistakes, the Cavaliers have hurt themselves repeatedly this season, and as Elliott has reminded his players during preparation for the Louisville game.

“What I said is, ‘Right now, fellas, we’re not a team. We’re a group of individuals. We’re undisciplined. That’s … why we’re not making the plays that we’re supposed to. But when we heal as a team, this team can be special. It’s got everything that it needs to be competitive in every single game that it plays with a chance to win.’ ”

Elliott said he’s trying “in conjunction with the staff to help find the right motivation for these guys to be detail-oriented, focus on the little things, to not listen to the voices on the outside, just focus on what they can control. What they can control is their attitude that they come to work with every day, the quality of the work they put in, and then how they show up on Saturday to play.”

Johnson said Elliott is “very detailed, and he wants it to be very detailed program. It matters on the field. You to make sure you’re in your right alignment. If you’re supposed to be seven yards off, be seven, not six. If you’re supposed to have your inside foot up, make sure you have your inside foot up, because it matters. It’s a game of inches.” 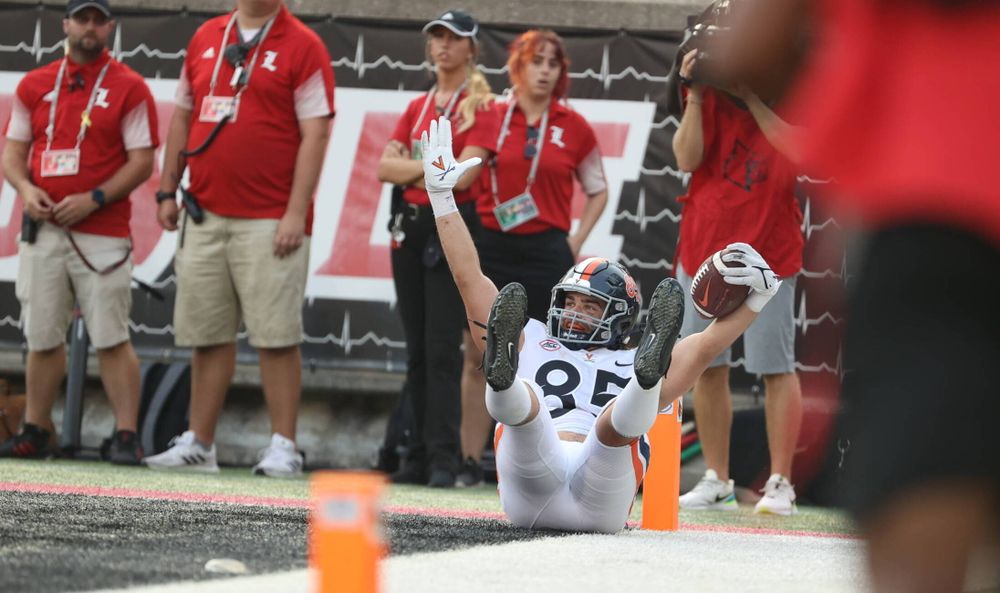 Grant Misch at Louisville in 2021

ON THE MEND: As a true freshman last season, wide receiver Malachi Fields caught 11 passes for 172 yards, and he was one of the Cavaliers’ standouts in spring practice this year.

Fields, however, suffered a foot injury during training camp in August and has yet to play this season. Elliott said he hopes Fields, a graduate of nearby Monticello High, will be cleared to return this fall but added that there’s “still no timetable.”

For now, Elliott said, “I’m encouraged seeing him walk around. He’s started to progress to the next phase of his rehab, doing a little bit of running …

“We won’t rush it, force it. We’re going to do what’s best for him in his recovery. If he gets to a point where the doctors say they’re going to turn him loose, we’re going to get him going.”

MEDICAL REPORT: Starting cornerback Fentrell Cypress, who missed the Duke game with an illness, is back at practice this week, as is reserve linebacker Jonathan Horton, a special teams standout.

Wide receiver Billy Kemp IV, however, is unlikely to play against Louisville, Elliott said. Kemp, who’d missed the previous two games with an illness, suffered an injury on Virginia’s first series against Duke.