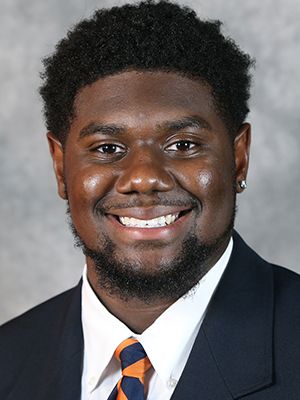 AT VIRGINIA
2021 – Appeared in all 12 of UVA’s games and started in 10… made 23 tackles on the season… made two tackles against William & Mary, Miami, and Pitt… made four tackles and 1.5 tackles for loss against Georgia Tech… made five tackles and 0.5 tackles for loss against Wake Forest… made a tackle against Virginia Tech… 2020 – Appeared  in nine of UVA’s 10 games… one of 12 UVA true freshmen to appear in a game… made collegiate debut against Duke where he finished with two tackles, including his first career sack that he shared with OLB Noah Taylor… made one stop at No. 1 Clemson… made two tackles against NC State… made one stop at Wake Forest… recorded four tackles at No. 11 Miami… notched four stops at Virginia Tech… named to 2021 ACC Academic Honor Roll.

HIGH SHOOL AND PERSONAL
Played defensive tackle at Archbishop Spalding for head coach Kyle Schmitt… three-time first-team all-county honoree for Archbishop Spalding… two-time All-MIAA honoree… made 22 tackles and 4.0 sacks at nose tackle in 2019… made 30 tackles as junior… won the 2019 Al Laramore Trophy as the No. 1 lineman in Anne Arundel County… a three-star recruit by ESPN.com Rivals.com and 247sports.com… major is undecided in UVA’s College of Arts and Sciences… recipient of the 2022-2023 John Eric Dahlgren Endowed Football Scholarship.