Senior Andrew Abbott (Republican Grove, Va.) was brilliant again and earned his seventh win of the season after pitching 6.2 innings of shutout baseball. The reigning ACC Pitcher of the Week struck out 11, the fourth time in his last five starts he has fanned 10 or more batters. Abbott surrendered just three hits on the night and issued three free passes. He struck out six of the last 10 batters he faced. 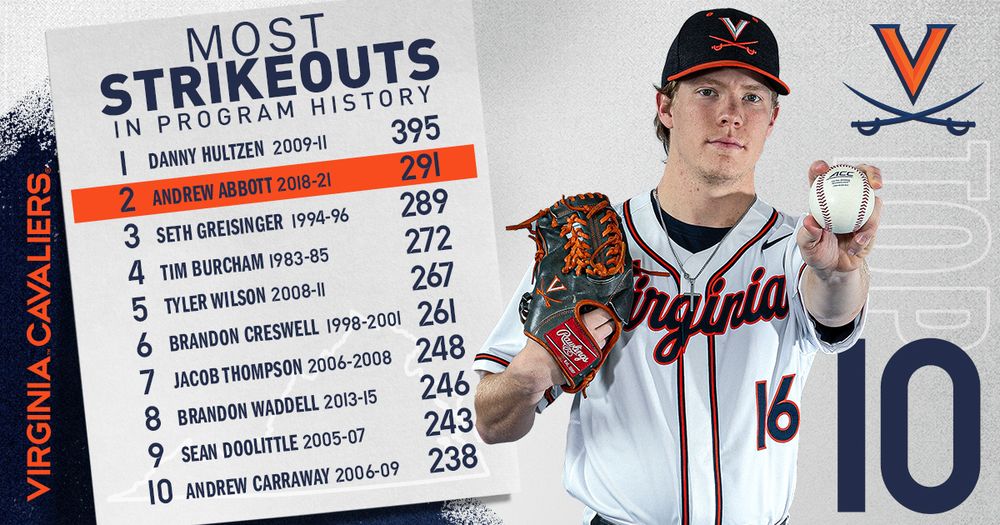 Before Abbott took the mound in the bottom of first inning, he found himself with a 4-0 advantage. Virginia scored four runs, all with two outs, in its first at bat of the game. The four runs were the most by the Cavaliers in the first inning this season.

After a RBI double from Nic Kent, Chris Newell gets in on the 2-out action!

Newell finished the night 2-for-5 with a pair of RBI and two stolen bases. He extended his hit streak to eight games, the longest on the club and the longest of his career.

Teel and Kent found themselves in the middle of the other run-scoring inning for Virginia in the fifth. Teel drove in his second run of the game to start the three-run frame and then came around on a two-RBI single up the middle by Kent.

Teel was 2-for-5 with a run scored and two RBI while Kent went 3-for-5 with a game-high three RBI. The multi-RBI performance for Kent was his ninth of the season, second most on the team. Teel has reached base in 10-straight games.

Righthander Kyle Whitten (Manassas, Va.) tossed the final 2.1 innings relief and struck out five batters. Abbott and Whitten combined to strikeout 16 batters, the 32nd time this season UVA pitchers have combined to strike out 10 or more batters in a game.

The series will continue on Friday (May 21) with the middle game of a three-game set. Virginia will send righthander Mike Vasil (6-4) to the mound and he will be opposed by righty Mason Pelio (3-7). First pitch is slated for 2 p.m. and will air live on ACCNX.