CHARLOTTESVILLE – Standouts on the University of Virginia baseball team that won the NCAA title in 2015 included Adam Haseley, Pavin Smith and Ernie Clement, all of whom were high school seniors the year before. The Cavaliers have made five trips to the College World Series during Brian O’Connor’s illustrious tenure as their head coach, and freshmen have played pivotal roles on many of his best teams.

It’s too early to say if UVA’s latest group of first-year players can match the feats of the 2015 freshmen, but the class is off to a sensational start.

Shortstop Griff O’Ferrall, the Wahoos’ leadoff batter, is hitting .351. Right-fielder Casey Saucke is hitting .419, with five home runs, and had a 21-game hitting streak that ended Sunday. Outfielder/designated hitter Colin Tuft has a .328 batting average, and Justin Rubin, a part-time starter at second base, is at .314. There’s also first baseman/DH Ethan Anderson, who’s hitting .295 with three homers, and freshman pitchers Jay Woolfolk and Matthew Buchanan have impressed, too.

“I think it’s great,” said Devin Ortiz, a graduate student who’s in his fifth season at UVA. “These guys are competitors. They’re hard-nosed kids, and they’re have fun doing it.”

O’Connor, who’s in his 19th season at UVA, liked what he saw from the first-years in the fall, when he was able to assess their athleticism and ability to deal with adversity. Still, he said Monday, “sometimes you can be fooled a little bit [by fall ball], and when the lights come on the spring and winning and losing matters and it’s not just practice, sometimes you see a little bit different.”

That hasn’t been the case with this group. The Cavaliers, ranked fourth nationally, are 23-2 overall and 7-2 in ACC play. They’ve won 19-straight games at Disharoon Park, where they defeated Richmond 8-2 on Tuesday.

O’Ferrall went 3-for-3 and scored two runs against the Spiders (12-9). Saucke went 1-for-4 and drove in two runs, and Anderson had an RBI single in the fifth inning that stretched the Hoos’ lead to 5-1.

“We’re at that point they’ve had so much experience, all of them, that we expect them to have a chance to be successful,” O’Connor said of his freshmen. “Whether they get a hit or not, you can’t control that, but at least that they’re going to have the right approach and be ready to succeed. And I think they’re all talented kids that will continue to help us win ball games.” 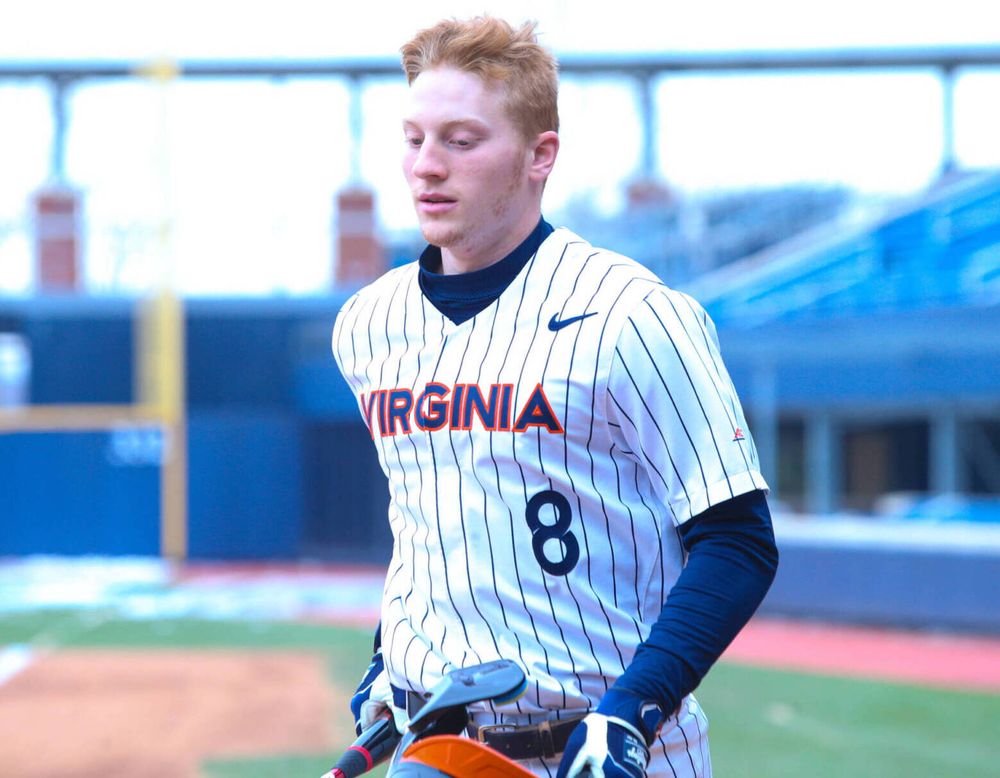 O’Ferrall is a graduate of St. Christopher’s School in Richmond, where he also starred in football. He leads the Hoos with 11 stolen bases and is tied with sophomore catcher Kyle Teel for the team lead in walks (21).

“I’m not sure if I expected it,” O’Ferrall said Tuesday night. “Coming into this atmosphere, it’s a lot for a freshman, and so honestly all I really did was try to work as hard as I could and take in with the coaches and the older guys were telling me. I never really like expected to play well. It was kind of just like, ‘I’m gonna work as hard as I can, and if good things come, it’ll pay off, all that hard work.’ ”

To earn a starting position as a freshman in O’Connor’s program is no small feat. To win the job at shortstop is especially noteworthy.

“Shortstop, in my opinion, is the third-most important position on the field,” O’Connor said Monday. “First and foremost is the guy on the mound. It starts there, and then it’s the catcher, and behind that it’s the guy running the show in the middle of the field. Not only do you get a lot of balls at shortstop, you’re also kind of the leader out there.”

O’Ferrall, whose father played baseball at Virginia Military Institute, has “had a lot of success in multiple sports, and he knows what it takes and has all the qualities of a winner,” O’Connor said. “It’s showing up every day, and very few young men can do that at this level, step in right away and doing what he’s doing. Not only that he’s hitting leadoff for us, too, and doing a heck of a job.”

In a game in which Ortiz started on the mound and pitched four scoreless innings, O’Ferrall led off the Cavaliers’ first with a double to left-center field. He scored on Ortiz’s RBI double, and Virginia led the rest of the way. In the eighth, O’Ferrall leaped to snare a line drive off the bat of UR’s Jared Sprague-Lott.

When this class signed with UVA in November 2020, O’Connor said, the coaching staff “thought it was a special group of athletes that had some unique characteristics about them, that they could learn really quickly from our veteran guys that had been around here a little bit, and certainly they have. They’ve made huge contributions.”

O’Ferrall said the first-year class is made up “a lot of grinders. Everyone loves coming in and getting extra work together. Just looking around and seeing all these first-years working in their free time, getting extra reps in the field, hitting extra, it’s just a really nice thing to see. And it’s even better when you see it pay off on the field. A lot of the first-years have started this year and gotten a lot of playing time, and when they have played they’ve done really well. That’s the best: the reward of being down in the trenches with all of them and then seeing it come out in the game.” 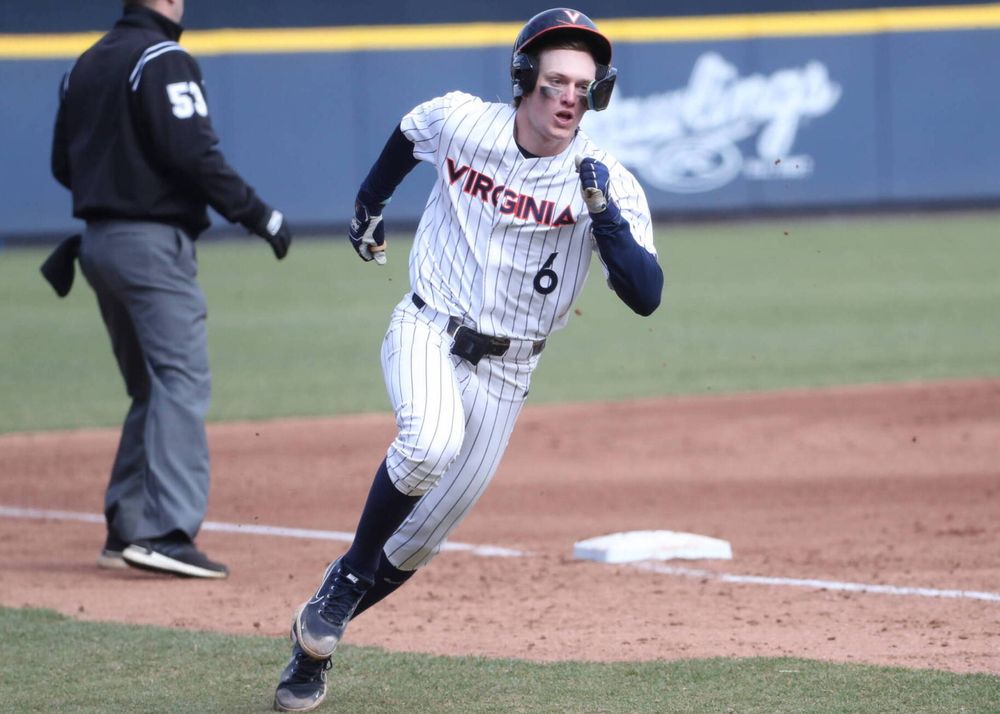 With fifth-year seniors Ortiz and Alex Tappen in the lineup, as well as juniors Chris Newell and Max Cotier and sophomores Teel and Jake Gelof, the Cavaliers have no shortage of veteran leadership. That’s helped the freshmen.

“I still feel like a rookie,” O’Ferrall said, “but the older guys really do a good job of bringing you in and making you feel like everyone else. Everything’s a learning experience.”

Ortiz said: “I’m really happy for a lot of the young guys, and once the season is over, which is a long time [from now], it’s gonna be awesome to see what they can do in the future.”

Virginia resumes ACC play this weekend with a three-game series against No. 22 Georgia Tech (17-9, 4-5) at Disharoon Park. The teams are scheduled to meet at 6 pm. Friday, 4 p.m. Saturday, and 1 p.m. Sunday.

“We’re obviously off to a nice start,” O’Connor said, “and Georgia Tech is very, very good. And so we’re gonna have to come out and play really good solid baseball in every facet of the game … to have a successful weekend.”

The Cavaliers’ series with the Yellow Jackets last year was the turning point in what became an unforgettable season for O’Connor’s club. Heading to Atlanta, Virginia was 11-13 overall and 4-12 in the ACC. The Hoos dropped the opener to the Jackets but came back to win the three-game series, and they rarely stumbled thereafter en route to the CWS in Omaha, Neb.